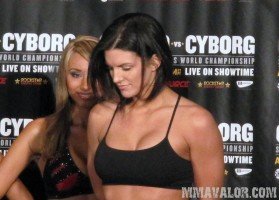 Mixed in between the two grand prix fights last Saturday, Strikeforce announced the return of Gina Carano (7-1) to fighting. Mislabeled as the face of women’s MMA during her rather awkward ringside interview, Carano confirmed she is back training for a return to the sport later this year.

Gina Carano has been away from MMA since August 2009 working on a movie career and recently completed a movie where she was in the starring role called Haywire. The last time we saw her in the cage she was getting her face smashed, in route to a TKO defeat by Cris “Cyborg” Santos. The bout was for the women’s middleweight (145 lbs.) championship, which Santos has now successfully defended twice.

Now that the “face of women’s MMA” has returned to prove to herself that she is better than her last fight, what does Strikeforce do with her? After the beating she took and long time away from the sport, a rematch with Santos right now has to be out of the question. Carano needs to be built up again, starting from zero, especially if Strikeforce wants to continue to proclaim her with such high regard and not as just a pretty face.

Since women’s MMA is still in its early stages, the Strikeforce middleweight division is still very thin. With only five fighters who last fought at 145 pounds and two of those being Carano and Santos that leaves just three in-house options for Strikeforce and Carano.

Shana Olsen (4-1) – Olsen is coming off a loss to Julia Budd at Strikeforce Challengers 11 and might be the best option for Carano’s first fight back.

Julia Budd (1-1) – Budd only has two professional MMA bouts, winning her debut against Olsen and losing her last time out against Amanda Nunes. Even though Budd is inexperienced she would also make a good first opponent back for Carano.

Amanda Nunes (6-1) – Nunes is coming off an impressive knockout of Budd at Strikeforce Challengers 13 and appears to be a rising star in the women’s middleweight division. Though a matchup with Carano is Possibly, Strikeforce would be ill-advised to match at this point.

Carano is a fan favorite and thus people want to see her, but Strikeforce needs to handle her return with caution or they might find Carano back doing movies.

[Update] Looks like Gina Carano is not in fact back and it doesn’t appear she really has plans too either.