Though the future of the promotion is always in question, Strikeforce continues to crank out high-quality fights with their remaining roster, Saturday’s Strikeforce: Rockhold vs Kennedy being no exception. Two titles are on the line, as Luke Rockhold finally meets Tim Kennedy in defense of his Middleweight title, while Nate Marquardt and Tyron Woodley will vie for the vacant Welterweight title. Showtime subscriptions are expensive though, so let’s try to make a bit of cash to pay that cable bill.

Below is my comparison betting odds, any props that strike me as being money plays, and my confidence in how secure this prediction is. Now, onto the fights!

While Strikeforce is starting to look a little barren with the departure of the upper weight classes, two legitimate Middleweights will square off in a fantastic title bout. Rockhold was able to rip the title from Jacare’s hands with a five round decision and while competition has been sparse, his time in AKA will do nothing but sharpen him for battle with Tim Kennedy. Kennedy has packed some quality fights into his time in Strikeforce, but opponent injuries and issues lining up quality opponents have left him a year outside of the cage and facing his toughest test to date. Kennedy is a solid all-around grappler with a limitless gas tank, but he’s facing a fresher and honestly better fighter in Rockhold. The two areas Kennedy could exploit on Rockhold would be his suspect chin and a gas tank that may not be able to go five hard rounds, but both areas are crapshoots at best. Look for some value on Rockhold if possible, but failing this, the Fight Starts 3rd round prop should pay out here, as I don’t see a submission or KO coming easily for either man.

One of my favorite fighters of all time, Nate Marquardt will get back into the cage after a tremendous layoff, facing Tyron Woodley for the vacant Strikeforce Welterweight title. Marquardt has one of the most well-rounded games in MMA with dynamic striking, submissions from both top and bottom and a tremendous amount of positional grappling skill. This is skill that’s been on the shelf for some time though, and a workhorse like Woodley makes for a rough return to the cage, especially in a five round fight. Woodley, despite all the hype, has turned into quite the flop in MMA, sticking with the pure wrestling game he initially showed up to the cage with. If Marquardt had a tune-up for this bout at Welterweight, he’d be an easy favorite, but that concern tempers my number above. I like the looks of a Marquardt submission combined with the Over, as Woodley could easily find himself stuck in a submission with his wrestling game plan, and can’t hope to finish Marquardt early, making a fantastic hedge. 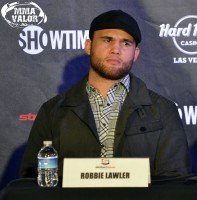 Another high-octane Middleweight fight will be sure to entertain, as newly minted 185lber Lorenzo Larkin will face veteran fighter Robbie Lawler. Lawler has been lurking in Strikeforce for years with a rather lax fight schedule, but never fails to entertain with his epically powerful punches. Larkin is an interesting match-up for Lawler, as a young and fast fighter with a ton of athletic ability, yet Lawler has never seemed to be impressed by anyone situated across the cage from him. This is very similar to Lawler vs. Manhoef in my book, where Larkin can score seemingly at will, but Lawler is always one punch away from finishing it. Depending on the straight lines, you could have a nice arb opportunity here with a Larkin straight line and Lawler KO, or just coast on one of those bets solo.

Legendary BJJ fighter Roger Gracie hasn’t had the easiest transition to MMA with Strikeforce, but reborn as a Middleweight, he stands ready as he faces Keith Jardine. Jardine will thankfully avoid a situation where he can be knocked out with this fight, yet his style translates somewhat poorly in this match, with his unorthodox attack methods being completely lost on Gracie. While you might be tempted to jump on Gracie here, this one isn’t as easy as some would think, as Jardine has proven himself to be a dangerous sprawl and brawl fighter in the past, and could hang Gracie out to dry on the feet here. Overall, Gracie brings such incredible functional strength to the cage that I can’t see him no getting a takedown and potential finish, yet Jardine has the ability to grind Gracie down on the feet and steal a finish as well.  No matter what you wager, wager small, but an ITD play should cover you and could be combined with a straight wager as well.

One of the most underrated fighters on the planet, Jorge Masvidal will try to work himself deep into the division, taking on baby gorilla Justin Wilcox. Wilcox is a fighter with a tremendous upside himself, but a loss to Carlos Fodor and no activity this year has kept him out of the fight fan’s minds, which he’ll look to remedy with a solid showing against Masvidal. While you might think this is a fairly even fight on paper, I see this being a great bout for Masvidal. Wilcox brings some explosive wrestling and punching to the cage, but Masvidal is one of the most physically gifted individuals in the sport. Overall, Masvidal’s reach and active punching style should make him difficult to close on, and his potential to land takedowns of his own can completely change this fight.

Taking place from the Rose Garden Arena in Portland, Oregon, the Strikeforce: Rockhold vs. Kennedy card will air live on Showtime starting at 10pm PT/ET with the Strikeforce preliminary card airing on Showtime Extreme prior to the main card.