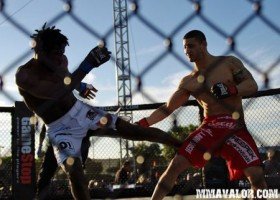 Daniel Straus (20-4) has cemented his title shot for the Bellator featherweight belt.  If he wanted to, he could just coast on his accomplishments and wait for it.  But that’s not his style; instead Straus will be fighting at Bellator 78 against UFC vet Alvin Robinson.

Winner of the Season Six Featherweight Tournament, Daniel Straus had to win three tough fights in just three months for a chance to contend for the Featherweight title.  With all three victories coming by way of unanimous decision, Straus should be getting ready for his title shot against the winner of the Pat Curran/Patricio Freire fight. Unfortunately, Curran (17-4) obtained an eye injury (to his orbital bone) during training, and his match has been postponed.  This means that the Cincinnati native will have to wait a while before getting his hard-fought title shot.

Many fighters would be content with waiting for what has already been earned but Straus agreed to step up and fight UFC vet Alvin Robinson (12-6) at Bellator 78.

While Straus has a great ground game (Straus is an accomplished wrestler), he will more than likely be relying on his ever improving hands to try to make quick work of Robinson.  Furthermore, Robinson is an impressive Gracie Ju-Jitsu black belt, and a fight to the ground might turn into a very long night for Straus.

Even if Straus were to lose however, he would in no way be in danger of losing his promised title shot against the eventual featherweight champion. Straus though is bucking the trend of waiting around that the Bellator tournaments sometimes produce in favor of staying busy.  Daniel Straus is a fighter and not one to be afraid of taking unnecessary risks.

The featured bout between Daniel Straus and Alvin Robinson will air on MTV2 as part of tomorrows Bellator 78 main card.