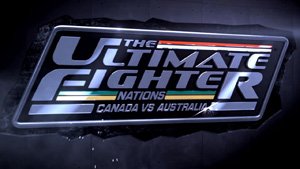 You know that morning after barrage of twitter activity regarding the rates from last night’s episode of The Ultimate Fighter we all so look forward too? Well prepare to be hit over the head with tweets of the sky falling and horrible ratings starting next week when The Ultimate Fighter Nations: Canada vs. Australia gets rolling on FOX Sports 1.

Debuting immediately following Wednesday’s UFC Fight Night 35, The Ultimate Fighter Nations features welterweights and Middleweights from Canada and Australia competing for a UFC contract. Patrick Cote, who competed on Season 4 of TUF, will be the head coach Team Canada and TUF 11’s Kyle Noke will be the head coach for Team Australia. Here is a look at the roster in which these head coaches will be looking to guide into future UFC superstars.

The latest installment of The Ultimate Fighter has nearly flown completely under the radar, perhaps lost amongst the other variants of the reality series. Even without a cast of fighters the upcoming “TUF: Brazil 3” and “TUF: Team Penn vs. Team Edgar” have received much more attention based solely off the star power of the head coaches. The Ultimate Fighter Nations does not have this luxury and it’s relatively unknown fighters and lack of a push from the UFC only adds more water to the fire. The US ratings stand no chance…….

Since leaving SPIKE the MMA reality show has never been able to achieve the same numbers on FX or most recently with FOX sports 1. The results have prompted a weekly ritual of websites and others to redundantly point this out and compare said numbers to anything and everything. While these numbers are likely a product of just how many people have the ability to watch SPIKE versus FOX Sports 1, this season might take the cake in terms of low ratings and weekly rants.