Last night’s Bellator 78 saw the season seven welterweight tournament reach the finals in not so pretty fashion. While the four fighters vying for the $100,000 over sized check and a title shot did what the do best the referee’s were not doing their best work. Their actions or lack thereof tainted the two semifinal outcomes and overshadows the welterweight finals match up. … END_OF_DOCUMENT_TOKEN_TO_BE_REPLACED

Saturday's UFC 153 event in Brazil was one of the years best that had several great fights. With only six more events (free and PPV) this year for the Ultimate fighting Championship, UFC 153 re-kindled the notion that the Welterweight is most likely the toughest division the UFC has. Despite being stagnate at the top for most of the year, the welterweight division is heating … END_OF_DOCUMENT_TOKEN_TO_BE_REPLACED

Jon Fitch is set to fight Erick Silva at UFC 153, but will he be ready? Jon Fitch (26-4-1) at one time was one of the most feared men in the UFC Welterweight division.  Fitch spent three years as the second best Welterweight fighter right under Georges St. Pierre, and defeated a number of great fighters including Paulo Thiago, Thiago Alves (twice), and Diego Sanchez.  Fitch … END_OF_DOCUMENT_TOKEN_TO_BE_REPLACED 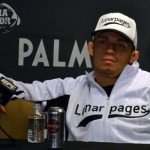 For those keeping score at home you can caulk up two more in the win column for the injury bug as he’s claimed two more victims to continue his dominance in the UFC. The latest fighters to get tapped out by the injury bug are Rory MacDonald and Josh Koscheck, leaving BJ Penn and Jake Ellenberger without opponents. … END_OF_DOCUMENT_TOKEN_TO_BE_REPLACED