The Ultimate Fighter Live format has come and gone. After 14 tape delayed seasons the reality series moved to FX, changed days and went Live. The new format brought Live elimination bouts each week and was supposed to rejuvenate the series, but that didn’t happen and the second season on FX will be going back to the tape delayed format.

Unfortunately the move to Friday night didn’t do anyone any favors and the ratings suffered because of it and even though they were near the top in the key demographics for the night, they were not up the UFC’s standards.

Going back to the old format will allow more time for the reality series to draw in the viewers by further introducing the fighters and develop story lines. For now the show will remain on Friday nights at 7pm PT / 10pm ET on FX, but Dana White told Yahoo Sports that if “this next season isn’t up to the standards I expect, they promised me we can move it to Tuesday or Wednesday.” 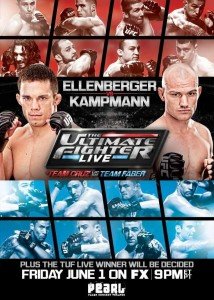 It’s only been a couple a week’s removed since the conclusion of TUF Live but the UFC is already getting ready for the 16th season of The Ultimate Fighter. Casting is scheduled to begin in a couple of weeks and the new season is expected to debut in September and feature welterweights. Coaches for the next season of the Ultimate Fighter have yet to be determined but it’s been rumored that this season will be Australia vs. the UK.

The Ultimate Fighter Live format will be missed by some but going back to the tried and true method of the paste should not hurt anything. Staying on Friday though is another issue……

What do you think about The Ultimate Fighter going back to tape delay???