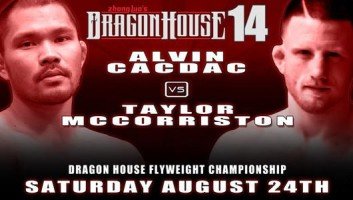 While you might think this weekend is absent of MMA action but in today’s MMA landscape you just are not looking hard enough. Tonight for example you have Legacy fighting Championships 22 on AXS TV but look even harder and you’ll likely find some local MMA action taking place near you.

This weekend in California you have two prominent MMA promotions’ putting on shows, one all amateur and the other a mix of amateur and pro fights.

The Dragon House 14 fight card will feature 10 professional bouts, headlined by a flyweight title fight between champion Alvan Cacdac and the former champion Taylor McCorriston.  The card will also have 6 undercard amateur bouts. The doors open at 3pm and tickets can still be purchased at the venue box office.

After another successful event and expo in San Jose earlier this year, World Combat Series returns to the San Diego area for WCS 12. The all amateur fight card will take place at 3pm but the doors for the outdoor expo open at 10am. Entry to the expo will also get you into the fights as well so you don’t want to miss this great all day event.

World Combat Series will be returning to San Jose, California on February 8th and 9th for their second MMA Evolution Expo that will feature all disciplines on Mixed Martial Arts under one roof.

Late last month in Redding, California Rogue Fights held an action packed night of amateur and professional MMA fights. MMA Valor was there to cover the events live but Rogue Fights have added all the fight video’s to their YouTube page. Check out the fights by clicking the link below, enjoy!

The MMA Valor Local corner is a new feature we are introducing to the site and we hope you enjoy it. If the is a California event of fighter you want use to cover or interview please comment below or use the “contact us” page to send us an email.