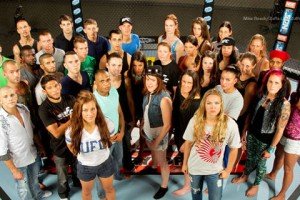 The Ultimate Fighter 18 was an odd season of TUF to stay the least, the women brought it, while a record amount of male fighters were dispatched by cinnamon rolls and pizza rather than their fellow competitors. As such, the Finale card was primarily drawn from outside the TUF universe, with several new faces making their debut in a bit of a gift for MMA obsessed fans. Our main event is a rubber match that started in TUF 5, with Gray Maynard looking to take the final fight against Nate Diaz in what should be a ridiculous scrap. There’s plenty of action to cover, so let’s dig in.

Gray Maynard vs Nate Diaz: A fight between two former title challengers who have never tasted gold, this could be a last ditch effort to get back into contention or be swept under rug forever. Maynard has struggled at the top of the division in his late few outings, either being beaten to a pulp in engaging with fighters, or almost being outscored while trying to force a fight. With his game having morphed from elite wrestler to a boxer/wrestler build, Maynard is still sharp and powerful, with few holes in his game to exploit.

Someone who has consistently found those gaps in the armor is Nate Diaz, whom comes into this off a brutal KO loss of his own. Having been hustled non-stop against Benson Henderson, Diaz took to a fight with former Strikeforce champ Josh Thomson, but was dialed in immediately and destroyed with a series of head kicks. Now having seen the error of such a systematic fight style, Diaz will either need to adapt or find himself the biggest mark in the division, as he takes on someone with plenty of ring time devoted to beating him.

This one comes down to Diaz and how he wants to engage, as the same old slap box and predictable BJJ won’t be the thing to get Maynard out of here reliably. Meanwhile, Maynard’s chin has been cracked a few too many times to risk playing a long and drawn out boxing game with Diaz, whom could wobble him early and never let off the gas. The smartest plan for Maynard, and the one I think he goes with, is to box inside the pocket and clinch, forcing Diaz back to the cage the entire fight. By cutting off the majority of Diaz real weapons, Maynard need only be conscious of Diaz foot sweep throws and batter the younger fighter to another decision win.

The Ultimate Fighter 18 Women’s final – Julianna Pena vs Jessica Rakoczy: A surprising women’s finale pits number one pick Pena vs last pick Rakoczy, in a fight that should play out exactly how I just made it sound. Pena, despite being an undersized 135lber did very well this season, showing off a depth of grappling skill that was simply too much for most of the ladies she faced. In Rakoczy, she faces someone who has absolutely no interest in turning this into a no-gi grappling match, as her hands are really her one and only weapon. The major factor here is that Rakoczy doesn’t hit hard enough to stop Pena, whom needs only one takedown to change the entire outlook of the fight. Short of a perfect game plan for Rakoczy, we’ll be seeing Pena land her shot and lock up a sub from top position for the first female TUF contract.

The Ultimate Fighter 18 Men’s final – Chris Holdsworth vs David Grant: Survivors of the bizarre men’s TUF bracket, Holdsworth and Grant will hunt for that contract. Grant had the oddest TUF run in history, having beaten a replacement fighter in the semi-finals and moved into the finals when Anthony Gutierrez was beaten on the scale. On the other side of the cage, Holdsworth had to fight stiff competition to get where he in, having beaten Rousey’s number one pick, Chris Beal, as well as Michael Wooten on his way to the finals.

This will be difficult to call, not only because these guys will have grown tremendously since the show, but we saw almost nothing of Grant on this season. Holdsworth is clearly a sound fighter everywhere the bout goes, with exceptionally smooth BJJ and a frame built to box. While Holdsworth is sound, I like Grant’s aggression, smart offense and strike selection, and feel he may be a bit too much for Holdsworth if both improve on an even keel after the show. It’s a toss-up without better intel, but Grant is my pick to ice Holdsworth in the second round and grab that six-figure contract in an exciting bout.

Akira Corassani vs Maximo Blanco: My pick for FOTN, Swedish battler Akira Corassani will take on well-traveled fighter Maximo Blanco. Corassani is an interesting fighter, having a great deal of power and aggression, but one of the worst chins I’ve seen at this level of competition. This makes nearly every fight a razor-close affair, as Corassani finds himself on the canvas several times every fight, and always battling back from the brink. Blanco is a dynamo when he chooses to be and can land on Corassani, but his own defensive flaws make this a fight either man can win. I have to side with Blanco to put more punches on target and dictate the fight, but don’t be stunned if a counter hook from Corassani flattens the Venezuelan fighter.

Rani Yahya vs Tom Niinimaki: A signing long overdue, Finnish fighter Tom Niinimaki will make his debut, being matched tough against Rani Yahya. Niinimaki is a well-rounded fighter who has made a habit of dispatching former Zuffa fighters on his quest to be signed, using sharp boxing and a modern no-gi BJJ style to snare and submit opponents. Yahya is the superior grappler, particularly in positioning, but finds himself outgunned standing against a vicious long-range striker. It’s a close one, but I like Yahya to hit takedowns and win that positioning battle, with Niinimaki’s openings being early in the fight, or late if Yahya burns himself out on the way to a decision win.

Jared Rosholt vs Walt Harris: A fighter I’m painfully well-acquainted with over years of covering this sport, Jared Rosholt is called up to the big leagues, taking on an older prospect in Walt Harris. I’m not trying to be cruel when I say that Rosholt, in no way, resembles a fighter in his quest of takedowns and complete palpable fear of actual combat. Harris is both green in terms of gym time and competition, but seems to have a few decent tools with his sharp jab and strong rear leg kick attacks. Rosholt needs takedowns to win, while Harris needs to make Rosholt fight and inevitably freeze in the face of danger. In a long fight, I like Harris endurance to allow him to outlast Rosholt and connect enough standing to get a late TKO, or sway judges that he was more effective overall.

Sean Spencer vs Drew Dober: Finding his way into the UFC after being ousted on TUF Live, Drew Dober will take on Sean Spencer in a Welterweight bout. Dober was a victim of the ridiculous one round elimination round of that TUF season, but went back to the regional circuit undeterred, where he picked up plenty of work with his new notoriety. Unfortunately in Spencer, he draws a better and larger version of himself, making this a harsh homecoming to UFC proper. I like Dober’s power, but he’s going to have a hard time landing on Spencer as he slips and strikes, ultimately beating Dober down midway through the fight.

Ryan Benoit vs Josh Sampo: Two outstanding entries into the Flyweight division, human dynamo Ryan Benoit faces the gritty and methodical Josh Sampo. Benoit brings a razor-sharp muay thai game combined with stellar wrestling and the mind to mix them judiciously throughout a match. Sampo is a fighter whom not only has a massive arsenal, but he’s brilliant in his ability to pick up on weakness and shift his tactics mid-fight to snuff out his opponents with a murderous grind. It’s a shame these two need to meet in their debuts, as both have potential to go far in the division and don’t need a loss holding them back just yet. In a pitched battle that should turn heads, I like Sampo to have a bit of an edge in the cardio and grappling department, allowing him to snatch the last two rounds in a spirited decision win.