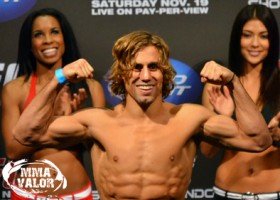 Urijah Faber returns this Saturday night when he takes on Michael McDonald at UFC on Fox 9. After spending years helping to build the WEC and defending his featherweight title, Faber returns home to Sacramento. It only seems fitting that, in the city in which he forged his legacy, Sacramento is the place where the fate of that legacy will be decided.

Faber has long been one of, if not the, most popular fighters under 155 pounds. He was the star of the WEC and has continued to be one of the most marketable stars while transitioning to the UFC. After defending his WEC featherweight title (there was no UFC featherweight division at the time) five times, he has since gone 0-5 in title bouts. The streak started with two losses to Mike Brown, a PPV loss to Jose Aldo, a close decision loss to bantamweight champion Dominick Cruz and a loss to Renan Barao for the interim bantamweight title. Now aside from a stoppage loss in the first fight with Brown, Faber has lost all of the title fights by decision in bouts where he remained competitive throughout. Outside of those title fights Faber has an 8-0 record, 3-0 in 2013, since the first Brown fight. He has steamrolled top flight competition, such as Scott Jorgensen and Brian Bowles, and finished six of those eight fights. He is without a doubt a world-class bantamweight, consistently ranked in the top 3 in the world.

But can he still beat the best of the best? Saturday’s fight will tell us a lot. Facing a young, dangerous and talented fighter in Michael McDonald, Faber will attempt to secure himself yet another shot at the one thing that has eluded him the most, UFC gold. Truth be told, Cruz/Faber III is the biggest money fight the UFC can make right now in any of the three lower weight divisions. However, should he lose, he will likely find himself relegated to gatekeeper status, as many have already deemed his five title losses plenty enough. A loss to the 22-year-old McDonald would be seen in the eyes of many as the 34-year-old Faber finally passing of the torch.

For Urijah Faber, two options remain; survive and advance to one last dual for gold. Or falter and know that you are no longer the fastest gun in the west.