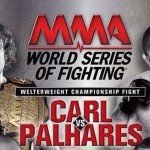 A duel title bout made for an important night at WSOF 9 for the promotion. While the card suffered in terms of pacing on the prelims, the main card was fairly solid all around, showing the best of what WSOF offers. … END_OF_DOCUMENT_TOKEN_TO_BE_REPLACED

It's been awhile since WSOF held a proper event, and while the star power isn't here, the WSOF 9 fights should prove to be competitive and entertaining. The WSOF 9 main event features a surprising champion in Steve Carl facing a well-known crippler in Rousimar Palhares. … END_OF_DOCUMENT_TOKEN_TO_BE_REPLACED

If a friend asked you, an avid MMA fan, to describe the World Series of Fighting, what would you say? Honestly, a little over one year into the promotion’s existence, I have no idea what I tell them. And I’m not so sure the brass at World Series of Fighting would know what to say either. Pretty soon though, that uncertainty is going to become a problem. Lofty goals mixed with … END_OF_DOCUMENT_TOKEN_TO_BE_REPLACED

With an action-packed MMA weekend, Saturday night’s WSOF 6 is just what you need to cap it all off.  Below I've highlighted some of the more competitive and interesting fights of the evening across the main and prelim cards, where WSOF's home-grown products will look to shine, and veteran fighters will look up upset. … END_OF_DOCUMENT_TOKEN_TO_BE_REPLACED

Another strong installment of WSOF made MMA fans Saturday night, and hopefully yours as well. There were some great new faces to the sport as well as familiar combatants from multiple generations, with the matchmaking to put everyone together and allow them to shine. Let's look at how the night played out and what we learned from everyone's performance. … END_OF_DOCUMENT_TOKEN_TO_BE_REPLACED