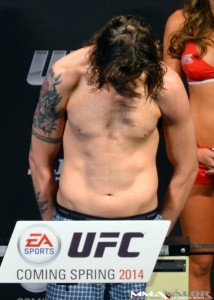 Cody McKenzie forgot his fight shorts for UFC on FOX 9, embarrassing left the tag on the replacement shorts but worst of all was his performance inside the Octagon.

Cody McKenzie stepped into the Octagon for his bout against Sam Stout with a blank white pair of basketball shorts that still had the price tag on them. The odd choice of fight attire was due to the McKenzie camp forgetting to pack their sponsored filled fight shorts. Mckenzie looked bad in his unanimous decision loss, though it had nothing to due with his shorts.

Since his time on The Ultimate Fighter season 12, McKenzie has one 3-4 in the UFC between the lightweight and featherweight division. Known for his guillotine choke, Cody McKenzie has at times looked pretty good but when he choke doesn’t materialize he’s looked bad. Thus was the case against Sam Stout who kept to his game plan and cruised to victory.

The three years Cody McKenzie has been in the UFC his skill set has yet to improve, creating an MMA version of a one trick pony. When opponents play into his game plan, McKenzie gets the win, but when they don’t you get what happened at UFC on FOX 9. Mckenzie has yet to evolve his game to be able to switch to a plan B when plan A fails and that has been and will continue to be his downfall.

If Cody McKenzie survives his latest loss or even if he doesn’t, a change of scenery is in order. Without it he’ll continue to remain a one trick pony and only go so far, no matter what the weight class.