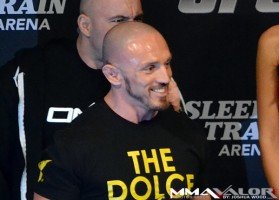 Diego Brandao stepped on and off the scale at the UFC 168 weigh-ins as if nothing was wrong, problem was there was something wrong.

The Ultimate Fighter season 14 winner weighed in seven pounds over the allowed 146-pound limit for a featherweight non-title fight. His opponent, Dustin Poirier was none to happy with the scale tipping at 153 lbs. and let Brandao know it as the two faced off.

Unfortunately The nonchalant attitude Diego Brandao displayed at the UFC 168 weigh-ins are nothing new to MMA. The catchweight division gets used far too often and are one of those issues that seem to get overlooked in the grand scheme of things. Granted it’s not as big as TRT or the judging in the sport but missing weight is unacceptable.

Fighters missing weight by as much as Diego Brandao did is a slap in the face of the sport and utterly disrespectful to the fighters who were professional enough to actually show up on weight. The fact that fighters don’t seem to care if they miss weight says to me that the punishment doesn’t bother them enough to keep them on point.

Punishment for missing weight depends on the athletic commission overseeing the event but for UFC 168, Brandao will be forced to forfeit 25% of his purse to his opponent and the NSAC (12.5% each). Now I don’t know about you but I’d be pretty pissed if I was to lose 25% of my paycheck, so why wasn’t Diego Brandao?

Obviously the punishment for missing weight doesn’t scare fighters enough so it’s time to up the consequences. Make these fighters respect the rules and if they don’t, make them pay. Respect the sport and make weight!

Diego Brandao ended up officially weighing in at 151.5 lbs. after his second attempt on the scales. That was still five and a half pounds over.