If a friend asked you, an avid MMA fan, to describe the World Series of Fighting, what would you say? Honestly, a little over one year into the promotion’s existence, I have no idea what I tell them. And I’m not so sure the brass at World Series of Fighting would know what to say either. Pretty soon though, that uncertainty is going to become a problem. Lofty goals mixed with … END_OF_DOCUMENT_TOKEN_TO_BE_REPLACED

It wasn't the best showing WSOF has had in their short run, with a cancelled bout, some sloppy scraps, and a main event that did little to get my heart pumping. There wasn't much of note, but a two guys found their way onto my radar for completely different reasons. … END_OF_DOCUMENT_TOKEN_TO_BE_REPLACED 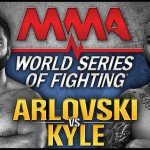 Another growing promotion in the MMA universe, World Series of Fighting, will hold their fifth show (WSOF 5) with an interesting headliner and four-man tournament. Our main event features former UFC champion Andrei Arlovski as he makes perhaps a final push in his career, taking on journeyman slugger Mike Kyle. The real cream of the show is the tournament however, with WSOF … END_OF_DOCUMENT_TOKEN_TO_BE_REPLACED

Another major promotion entered the fray, as the highly anticipated World Series of Fighting held its first event. With a card filled with talent from around the world from a variety of backgrounds and promotions, the card looked like a winner from top to bottom. Check out how the broadcast portion of the inaugural card went down below. … END_OF_DOCUMENT_TOKEN_TO_BE_REPLACED