The month seemed to fly by in record time and this month’s version of the MMA Fighter Rankings will look nearly the same as February’s. No it’s not because I just copied and pasted last month’s so stop thinking that. The fights in February just didn't produce many upsets and thus the rankings hardly changed. … END_OF_DOCUMENT_TOKEN_TO_BE_REPLACED

As last year ended we promised that we would be adding Women’s rankings to the monthly updates of the MMA Fighter Rankings and we are very pleased to finally bring them to you. Along with the top five fighter rankings in the Men’s Flyweight – Heavyweight divisions you can now get the Women’s top five from the Atomweight – Featherweight divisions. … END_OF_DOCUMENT_TOKEN_TO_BE_REPLACED 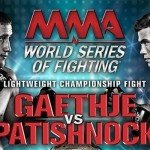 Despite several injuries and set-backs to the WSOF 8 card, the final product was competitive in spots and brutally one-sided in others, making for a fun night all around. Tonight’s WSOF 8 was also a historic moment for the relatively new MMA promotion as they handed out their first two championship belts. … END_OF_DOCUMENT_TOKEN_TO_BE_REPLACED

Postponement's, injuries and shuffling have left the WSOF 8 fight card looking less inviting than we'd have hoped. Nevertheless there are some quality mid-tier fighters making their way into the promotion these days to help carry this card. … END_OF_DOCUMENT_TOKEN_TO_BE_REPLACED