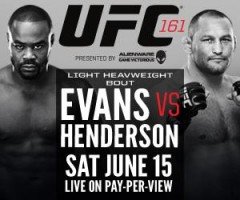 Injuries have done some serious harm to the UFC 161 fight card, yet the show must go on, and with replacements found where possible, we’ve got a pretty serious event lined up. The main event of Barao vs. Wineland scrapped, we have a fight of champions bumped up into the main card spot, as Rashad Evans takes on Dan Henderson.

A late addition to the UFC 161 card is a fairly impressive heavyweight tilt, as Roy Nelson looks to land the right hand on Stipe Miocic. So, let’s check out the rest of the action below and see what’s going down in the great white North.

Two men looking to rebound for high-profile losses, Evans and Henderson are gunning for redemption, and another title shot. Evans comes into this off of a surprising loss to Lil Nog in a fight just about everyone thought he’d dominate with ease. However, when his boxing was found lacking and his takedowns came up short, he chose to ride out the uneventful fight, taking a decision loss that left us scratching our heads as to what Evans was doing.

Henderson’s fight was much more in line what how he’s always fought, as he battled Lyoto Machida to a decision loss. The elusive fighter was simply too slick with his timing and never allowed Henderson to meaningfully engage during the contest, putting a mark in the loss column and making us wonder what Henderson has left to offer.

This is a bit of a depressing fight in a way, from my perspective. I feel that Evans doesn’t really care to fight at this point, having been easily dispatched by the champion and having a bleak future in this division. Henderson, on the flip side, is plenty willing but not always able to put on a real fight, as his movement and output have noticeably slowed. Evans can win this one if he comes in with some desire; hitting takedowns or feinting and landing on Henderson, which this is a very difficult fight for Henderson to pull off a victory in, short of a serious KO blow being landed. My money is on Evans finding a rhythm here that lets him push the action safely and do enough to win, while not doing enough to show he wants another fight with Jon Jones.

Fun heavyweights scrap between someone whom has been largely avoided, as Roy Nelson takes on Stipe Miocic. Nelson has perplexed me for his entire career, as someone who chooses to avoid success in some ways to live a non-athletic lifestyle. This has left him in a heavyweight division that he can’t possibly dominate, yet it’s hard to argue with his success against mid-carders. Everything he has resides in his right hand, which he can land seemingly at will through various deceptions during the fight. How long this current streak lasts is in the air, but he faces a legitimate foe in Stipe Miocic.

Miocic came into the UFC with some serious steam, as a multi-faceted fighter with a stellar record.  Having dispatched some of the lower-level heavyweights with his stiff leg kicks, sharp single leg takedowns and functional boxing, he ran into an issue against one of the biggest heavyweights in Stefan Struve.

Miocic has the tools to wage an intelligent war with Nelson, yet this is true of absolutely everyone else Nelson has faced as of late. Having some incredible ability to suck opponents into a fire fight, Nelson will need to do the same here while avoiding Miocic’s takedowns and outside striking. My brain says Miocic can hit a takedown or two, work elbows in the clinch and win a decision based on output, but my gut says Nelson shuts him down in the clinch and then flattens him as he tries to circle out.

Ryan Jimmo vs. Igor Pokrajac: It took forever for Jimmo to get his shot in the UFC, but going 1-1, he might be on the verge of being ousted. His opponent is the hard-hitting Igor Pokrajac, who has struggled mightily in his UFC career, but has never had a boring fight or been out of a match entirely. This is a case of Jimmo having an option: either fight hard and get Pokrajac out early, or fight like Jimmo and risk having Pokrajac steal a decision. With back against the wall, I expect Jimmo to bring the thunder and get Pokrajac out of there in the first two rounds, using his lethal striking and Pokrajac’s predictable movement to score a TKO.

Alexis Davis vs. Rosi Sexton: The women’s division gets another fight that should be a blazing match-up like the rest, as Alexis Davis faces women’s MMA legend Rosi Sexton. Davis is part of the new breed of fighters, having worked hard at honing her skills and turn herself into an effective finisher in MMA.  Sexton is an older fighter whom has toiled well outside her weight class for most of her career, and will have to do so again for her shot in the UFC. A well-rounded fighter, Sexton has been involved in martial arts almost as long as Davis has been alive, yet hasn’t progressed with the sport and is lacking in her modern skill set. This is a showcase for Davis, as her hard striking and wild transitioning on the mat make this a tough fight for the undersized Sexton. Look for a spirited effort, but one where Davis steps on the gas and never lets up, getting a TKO from ground and pound in the second round.

Pat Barry vs. Shawn Jordan: A fun heavyweight fight that could go either way, Pat Barry will attempt to land the big one on fellow athletic wonder Shawn Jordan. Jordan has a great upside, yet his rate of progression doesn’t appear to be lining up with his competitors, leaving him as being a prospect constantly worked over by elder fighters. Barry’s shortcomings are well-documented, but his innate ability to land power punches on the move makes him tough to engage at the best of times, especially for a smaller heavyweight like Jordan. Jordan could get this done if he’s smart about how he engages Barry and never lets him go from the clinch or ground, but closing distance is a tough task. I expect Barry to have a few bumps in this fight, but ultimately his overhand will find Jordan and starch him inside the distance.

Jake Shields vs. Tyron Woodley: A tale of two very different wrestlers, Shields will look to prove his world-class grappling is still a match to the UFC’s best, taking on Tyron Woodley. Woodley has been quietly improving throughout his career, and his last fight showed exactly how far he’s come in MMA, smoking Jay Hieron in one shot. Armed with accurate power punches, a full gas tank and elite wrestling, Woodley fits in nicely with other boxer/wrestlers in the division and can make a strong case for another high-profile fight against Shields. Shields is easily one of the most skilled grapplers on the planet, but hasn’t evolved his overall MMA like he should have. With lackluster kickboxing and fewer submissions than you’d think, he needs to shut Woodley down and never give him a chance in this fight. I’m not seeing that happen however, as Woodley is fast enough to land his power and avoid Shield’s shot, taking a TKO or decision win.

Sam Stout vs. James Krause: One of Canada’s favorite sons, Sam Stout will look to remain a force in his home country, taking on replacement fighter James Krause. Stout has looked to improve his overall game and keep afloat in the UFC, having added some nice takedowns and clinch work over the last couple of years. Krause has oddly changed his own game from lethal striker to counter-wrestling point fighter, which doesn’t seem to line up well with his current opponent. Stout has the advantage of being a technical fighter in a country known for giving him decisions, and while Krause has KO potential, he also has potential of throwing this fight away on his back foot. A close bout, but Stout should edge it on the cards with his forward movement and volume strikes.

Sean Pierson vs. Kenny Robertson: A battle of two elite wrestlers from different styles and countries. Pierson has had ups and downs in his career, but faces a reasonable test in Robertson, whom brings strong freestyle wrestling skills, but not a great deal of anything else. Pierson should be the stronger fighter and superior boxer here, allowing him to shut Robertson down and land his power shots for a convincing decision win.

Roland Delorme vs. Edwin Figueroa: My early pick for FOTN, grappling wiz Roland Delorme will face off with muay thai juggernaut Edwin Figueroa. Delorme has proven to be hard to put away and with a highly offensive grappling game is dangerous to even engage. Figueroa has shown he’s not easy to submit thus far in his career and will finally get a break from fighting other high-level strikers here, giving him breathing room to work his craft. I’m expecting fireworks here as Delorme looks to engage and work his way to the mat, with Figueroa trying to take away his base and land kill shots. In a close fight, I trust Delorme to win from the clinch and takedowns, working his BJJ game to submit Figueroa midway through the fight.

Yves Jabouin vs. Dustin Pague: A wonderful way to start off the night, lightning fast Yves Jabouin will bring his hands to bear, taking on sharp striker Dustin Pague. Pague hasn’t had an easy time of it in the UFC, having found himself consistently out grapple and rarely able to unload standing. He’ll have his opportunity here, though getting what he wishes for wont pan out so well for him against the fast and furious Jabouin. Pague does have some technical acumen, but Jabouin has him beat in every aspect of this fight, even having the option of mixing takedowns in to secure close rounds. A quick fight, as Jabouin lands his power and gets Pague out of there before the final bell.