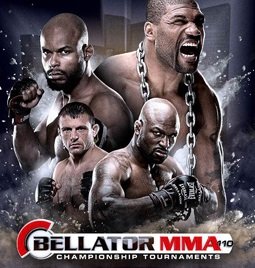 It’s been awhile since we’ve had Bellator rocking our airwaves, but Season Ten rolls out starting Friday, with a mess of tournaments at Bellator 110. Whether you like the format or not, there’s some decent fights to be had in this event, with the Light Heavyweight mini-tournament being the highlight of the evening.

Let’s check out the top of the card.

Quinton Rampage Jackson vs Christian M’Pumbu: The biggest star Bellator currently has, Quinton Jackson will fight in the laughably short Light Heavyweight tournament, taking on former champion Christian M’Pumbu. To me, Jackson is about done in this sport, having damaged his career with a lack of fitness and focus over the last several years. Having won his debut against Beltran, Jackson’s coordination was absolutely shot, and while he can arm punch anyone unconscious, he doesn’t stand much of a chance against a smart foe with exceptional skill.

Enter M’Pumbu, who probably isn’t that guy. M’Pumbu made his name by punching out a very weak tournament, but forced onto the bench due to Bellator’s format he fought just once in the last two years, dropping a decision to Attila Vegh. What M’Pumbu has is outstanding accuracy and a good deal of power in his strikes, and what he doesn’t have is the size to be a 205lb fighter or any real grappling skills that work in MMA.

I wouldn’t be completely shocked if Jackson was KO’d here, as he may not take this fight seriously and is a wild card at the best of times. However, Jackson has the ability to take M’Pumbu down at will if exchanges get to heated, and power for power, I don’t see M’Pumbu winning in a firefight. I’d love to be wrong, but Jackson should control this fight and ultimately crush M’Pumbu in the second round on a counter punch salvo, walking into a tournament final against…

King Mo Lawal vs Mikhail Zayats: Having played spoiler to Renato Sobral in the last tournament, Mikhail Zayats is back for this one, this time facing King Mo. Zayats is a solid sambo fighter with the systema striking style that tends to frustrate opponents, but takes a huge step up in competition here. For Lawal, we’re seeing a case of someone who coasted too long on natural skills and doesn’t have the ability to switch up patterns in a fight, having been bested by Newton in two outings and in dire need of a win here.

While I’m not sold on Lawal anymore, this plays poorly for Zayats, who will be firmly outmuscled and outgunned standing. Look for Lawal to force a boxing match and work his counters as Zayats fires from the outside, with one of his tight hooks eventually cleaning the Russian out as he moves forward behind his shot.

Bellator 110 will also feature the start of the 8-main featherweight tournament. The pairings for the opening rounds are Goiti Yamauchi vs. Will Martinez, Daniel Weichel vs. Scott Cleve, Diego Nunes vs. Matt Bassette and the below match up.

Mike Richman vs Desmond Green: The most interesting fight in the local heavy Featherweight tournament, dynamite puncher Mike Richman will face a very busy Desmond Green. Richman is coming off an amazing KO over Akop Stepanyan in his last fight and has been operating as the striker to beat in the division for some time, coming in as a hard test for Green.

Green comes into this one having worked his ass off over the last two years and showing constant improvement throughout that time. A masterful wrestler who prefers to learn the craft of MMA in the heat of battle, Green was found wanting against Fabricio Guerreiro in his last tournament run, but turned around in a hurry to get back into the fray for this next one.

I like Green’s work ethic and he could well come into this one with something to surprise us with, but Richman is great at maintaining range and has the one-shot power to crumple Green if he fails on a shot and is stuck inside the pocket. Don’t count on Green to get this one to the ground and grind out the win, but Richman only needs one opening, and I think he finds that within the first round.

Bellator 110 takes place at the Mohegan Sun in Uncasville, Connecticut and for those who have forgotten, the night’s preliminary card will stream live on Spike.com with the main card beginning at 6pm PT / 9pm ET on SpikeTV.