Bellator will get their 10th season started in just under two weeks and with the new season comes five new tournaments. While Bellator has deviated a bit, the tournament format is still their bread and butter. 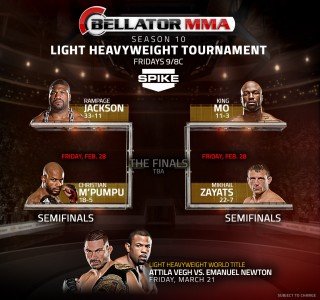 Last season brought lots of change to the promotion at the top of their divisions and this years tournaments will determine the next in line for title shots. This seasons feature some of the promotions biggest names including two champions looking to get their belts back.

The brackets have been filled and the opening rounds matchups are set, now all we need to do is watch how things play out. Before any punches are thrown though I will show you the tournament brackets and tell you who will walk away with the extra-large check and the title shot.

The only four man tournament this season will feature Quinton “Rampage” Jackson making his second Bellator appearance as his enters his first Bellator tournament. The two opening round matchups appear to be intriguing bouts but you have to think Bellator is crossing their fingers and toes that Jackson vs. King Mo takes place in the final. I think Bellator gets their wish here and in the tournament final Jackson will knockout King Mo to face the winner of the Attlia Vegh vs. Emanuel Newton title fight taking place on March 21st. 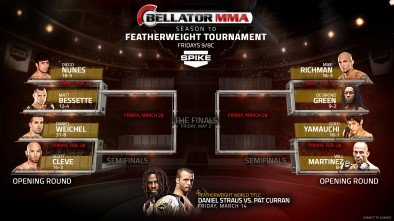 Getting started on the same night as the light heavyweight tournament will be the featherweights. A division that has always been one of the promotions deepest actually has several new faces looking to earn a title shot. The two favorites look to Diego Nunes and Mike Richman but I only have one of them making it to the finals. I see Daniel Weichel surprising many by making it to the finals and winning the tournament over Richman. 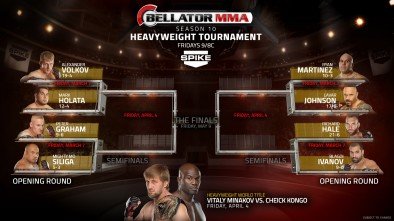 The heavyweight division has always been Bellator’s weakest division but this tournament isn’t that bad. The former champion Alexander Volkov headlines the tournament but I don’t exactly see him winning it all. I think the Bulgarian Blagoi Ivanov, should he get past the veteran Richard Hale in the opening round, will defeat the Russian Volkov in the finals. Should Hale defeat Ivanov though I’d say Volkov gets another crack at the belt. The welterweight tournament might have the best all-around opening round matchups of all the season 10 brackets. Andrey Koreshkov, Joe Riggs, War Machine and Nah’shon Burrell are all in this tournament. I like the veteran Joe Riggs to advance to the finals, but there i have him losing to the season 7 tournament winner Koreshkov. 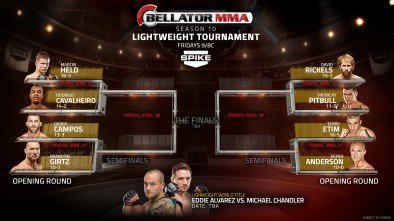 Bellator’s season 10 gets started on Friday February 28th on Spike TV and two of these five tournaments will get underway. Watch and see how my predictions unfold.