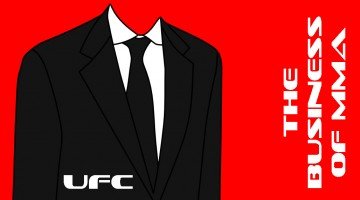 Last summer I wrote a piece about the business of MMA, detailing all sides of the fight game as it pertains to the UFC and their fighters. As the topic continues to generate buzz, fighters continue to air their dirty laundry and key players in the UFC continue to curse their way into the hot seat.

This is an emotionally charged issue, yet one that is criminally misunderstood by the majority of fight fans; looking at the problem from only one side. On this installment I’ll look at two new factors in the world of UFC economics that are closely tied together: UFC uniforms and the Sponsorship Tax.

UFC Uniforms: The Pros and Cons

News that surprisingly took off, Dana White mentioned that the UFC would be implementing an official uniform for fighters to wear to the cage and potentially to the weigh-ins. While details are still in the air currently, the uniform would appear to consist of shorts, a hat, and walk-out shirts, with the main sponsorship coming from a yet-to-be-named apparel company.

This has caused some outrage due to the UFC and apparel company taking up prime spots on the fighter’s clothing, with the idea that sponsorship dollars will be fewer than ever before. As with every business decision, there is speculation on how it will ultimately affect the bottom line, and we have pros and cons to consider.

For those fighters who are just starting out, finding a reputable sponsor can be a living nightmare. There are plenty of fighters who have been shafted by companies for sponsorship money, while some companies force the fighter to jump through significant hoops just to cash a check. With a company-wide sponsor, the checks will never be made of rubber and obligations are likely to be light.

CON: The fighter’s value may be predetermined

While some fighters have issue finding solid sponsorship early on, some fighters have voracious managers or are themselves savvy business people. Those fighters who have set up lucrative deals due to a silver tongue will find their best bargaining chip taken away from them. While they can still hustle to fill their banners and smaller spots on their clothes, they lose the ability to fill the best ad space and potentially make more than the standard rate, whatever that may be.

PRO: The sport will gain a professional make-over

The days of laughable logos, letters falling off the trunks, and ham-fisted MMA shirts will be gone, replaced by a clean and professional look. The ability to personalize shorts with smaller sponsors will make for some measure of individuality, yet color-coded trucks will allow for easier recognition during the fight and a better presence among other sports.

CON: MMA clothing will be crippled

While I myself don’t care for MMA clothing in general, I understand many fans love to grab up shirts from their favorites, especially if someone is rocking a particularly cool walk-out shirt. With this uniform in effect, you can consider this former of marketing essentially dead, forcing a myriad of clothing companies to pull of UFC sponsorship entirely.

PRO: The little guy will make some cash

New UFC fighters have a notoriously hard time finding sponsors, especially if buried on Fight Pass. This has left fighters taking garbage deals just to fill banner space and some fighters have claimed as little as $50 per ad when scheduled off TV. This company may not pay well, but every fighter will be compensated in some way.

CON: The big guys will lose out

While the guys jerking the curtain might not have a lot of value, guys holding titles or main eventing don’t have said issues. Demetrious Johnson, Jon Jones, Anderson Silva and many others have only one major sponsor that pays for the right to be exclusive to that fighter, and you can bet there’s a substantial check involved. With an apparel company taking the lion’s share of space, some of these companies, especially if they’re competitors of the main sponsor, will be forced to pull up stakes and go elsewhere. This hurts the stars in terms of who they can take sponsorship from and they’ll be locked into a deal that may be significantly less than what they previously made.

In all, it seems the devil will be in the details of this attire, but looking at it with our limited knowledge, it appears it may harm more in the long-term than it hurts. Fighters have also expressed concern about how it’ll affect weigh-ins, where many fighters make a unique mark with different walk-out attire, from the glamorous to the comical. As it stands, it’s too early to tell, but the idea at least has merit on the surface.

As I type this, Bjorn Rebney is screaming in the background on Inside MMA about how Bellator will never have a sponsorship tax. Indeed, the fact Rebney is bringing up this unpopular concept to the audience shows how much of an impact this contract stipulation has had. While it’s easy to be angry at the UFC for wanting a piece of the pie, this is another case of people looking at an issue from only one perspective. While I’m not entirely pro-sponsorship tax, I feel the need to play Devil’s Advocate to an extent, as the vocal support for the measure is nearly non-existent.

Shady Deals Are Over:

While the tax reduces the amount of fighters a company can back, and amount of money that can be distributed, it also keeps those fighters safe from bounced checks. This has happened to several fighters in the last few years from high-profile guys like Patrick Cote down to a few lower tier guys trying to make a living. If a company can’t afford the tax associated with entry-level fighters, they may not be able to hold up to their long-term deals either.

This set up now puts the UFC on the same contract as the fighter themselves, which carries the threat of a powerful legal backer in the event a company chooses to break their deal with a fighter. Considering sponsorship money is often what covers a fighter’s training expenses leading up to the fight, this security makes that money a sure thing, even if there may be less of it.

Predating the sponsorship tax, there was the issue of approved sponsors and this facet of the business in still in effect. Essentially, the UFC can choose to disallow a sponsor from advertising on their programming, whether due to conflict of interest (Coors light on a fighter but Bud Light at center cage), products that tarnish the brand (Ashley Madison, Bouncing botanical) or products that could hurt what a network stands for (Assault weapons, sexual-based products).

While there is an additional hoop to jump through, this works towards ensuring value for the sponsors as much as possible, without contaminating their air time with competing brands. Imagine if Pepsi spent major money to sponsor a fighter and a fighter wearing Coke shorts knocked him silly, or he was knocked out next to a Coke logo on the mat? While the memes would be great, it would drive that sponsor away from the sport.

The Value of Exposure:

As much as everyone hates to admit it, it’s the brand that showcases the fighters, not the fighter making a brand. Despite star-studded cards, the short-lived Affliction brand did less than 20% of the PPV business UFC did at the time, while Strikeforce was losing money consistently.

If you owned a t-shirt company, how much would you pay a world-class fighter to stand in their living room with the shirt on? How about to appear on a YouTube video that might get 10,000 hits? How about main eventing a card on FOX? It’s the same fighter in every situation, but it’s the venue and opportunity for exposure that changed. As such, the UFC does have a reasonable right to a portion of proceeds, as it’s their brand that’s making the ad valuable, not necessarily the fighter they sponsor.

UFC vs Bellator on Sponsorship: Greed or Need?

While Bjorn Rebney made the UFC out to be a horrid enterprise for looking to make money on the situation, keep this in mind: Bellator is owned by Viacom.

While the UFC is paid for advertising on their mats and various logos thrown around during the broadcast, Viacom is paid by not only that, but every single commercial that runs during the show, with Spike being a Viacom product. While UFC would run fights online with Facebook and YouTube making money, Bellator runs their prelims on Spike.com, where the site ads pay Viacom directly.

If Bellator doesn’t charge a sponsorship tax, it may be because it can float indefinitely on its own airwaves, while the dwindling mass appeal of MMA may have forced the UFC to get the most bang from their buck with a tax.

As with any closed business, we can’t see the internal workings of the UFC to determine if this money is padding a pocket or funding an expansion; buying Dana a Ferrari or paying off debt. From the outside looking in, it doesn’t appear to be a motivation of greed, but perhaps necessity to keep the entity running as it has been, during a lull in star appeal among champions. No one knows the UFC’s books like the UFC itself, and I find it hard to believe a company known for discrete bonuses and generous medical care would nickel and dime sponsors for the sake of being misers.