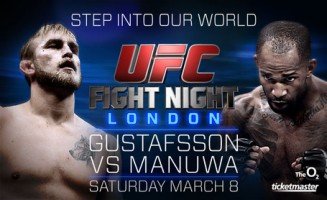 UFC Fight Pass is attempting to justify the price tag, and I have to admit they’re doing a pretty good job so far. What the Macau card delivered in terms of entertainment, UFC Fight night 37 delivers in terms of Euro MMA name value, with several stalwart fighters making an appearance. Our main event is an odd one, as Alexander Gustafsson looks to bounce back from his title fight loss, taking on unheralded Jimi Manuwa.

We have plenty of bouts to cover, to let’s dig right into UFC Fight Night 37.

Alexander Gustafsson vs Jimi Manuwa: Having taken champion Jon Jones to the brink and coming up short, Gustafsson will look to bounce back into the title picture, taking on the dangerous brawler Jimi Manuwa. Gustafsson has shown himself to be a true terror in the cage, with reach and precision in his strikes, heavy hips to keep himself upright, and a top game that comes across as deceptively dangerous. While he came up short against Jones, he did more to the champion than anyone ever has and showed his game at its pinnacle; effective at all ranges and defensively deft.

Manuwa came into the UFC with a solid following, and a highlight reel that belongs on the First 48, knocking men into living dead. A murderous puncher with raw, natural power, Manuwa hasn’t faced truly elite competition yet, but had torn the bottom out of the Light Heavyweight bucket with wins over Kingsbury, Diabate and Jimmo.

This is a fun fight, yet one I have a hard time seeing Manuwa winning with his unpolished physical style. While Manuwa certainly packs a massive punch, Gustafsson has a lifetime of boxing skills to allow use of his range, both offensively and defensively. With Manuwa needing to close range, Gustafsson can control the outside, or hit takedowns on the lackluster grappler and win from there as well. Short of crushing Gustafsson’s jaw during a transition period standing, Manuwa is drawing dead here as Gustafsson chops him up on the feet, leading to a TKO in the second or third round.

Michael Johnson vs Melvin Guillard: A stand-out fight between two men hovering just outside the division elite, Johnson will look to make a statement against veteran fighter Melvin Guillard. Both men are hot and cold to a degree, with Johnson failing when it comes to pitched grappling matches, while Guillard tends to lose in fights where his opponent’s force rapid transitions from standing to grappling. With this in mind, Johnson tends to play in Guillards wheelhouse too much and will find himself outgunned in terms of speed, power and overall prowess. Look for Johnson to try a more technical kickboxing match, but Guillard slips and rips to the body and head, puts his opponent on ice late in the first round.

Brad Pickett vs Neil Seery: Two solid editions to the Flyweight division, Pickett will bring his crippling power to 125lbs, taking on UK battler Neil Seery. For those unfamiliar, Seery is a heavy hitter with a nasty ground game; functioning like a classic catch wrestler with how he hunts for submissions on the mat. The real question here is how much both men have in the tank as this point, with each fighter being in their mid-thirties with plenty of fight miles on those knees.

I like Seery, but don’t feel he was ever fit for UFC level competition, lacking the polish to allow him to overcome cerebral foes that popular the elite MMA world. Pickett comes into this with more technical acumen on the feet and has the wrestling and BJJ to avoid most of Seerys offense if the fight gets too hot standing, leading to a convincing Pickett decision.

Cyrille Diabate vs Ilir Latifi: A match-up that may be a bit sad in reality, forty-year old Cyrille Diabate will look to bounce back from a serious muscle tear in his last fight, taking on the human bulldozer in Ilir Latifi. Diabate is a true master in terms of kickboxing, having perfect technique with his snaking punches and kick arsenal, but his body just isn’t up to this level anymore, having gassed out badly in his last several matches, even when winning. Against Latifi, he faces a fighter with a granite chin who routinely trains with the similarly built Gustafsson, and while his kickboxing may be sharp, it’s questionable if he can do anything to stop the Swede.

Latifi isn’t a world beater, but he is a monster in terms of power and has the takedowns to bury Diabate under his bulk at will. If Diabate can’t blast the Swede early, expect to see him struggle off his back while absorbing hammer fists and elbows, with Latifi taking a decision or late TKO win.

Davey Grant vs Roland Delorme: A UK fighter that made their way onto the standard TUF, Davey Grant will bring his viper-like striking to bear against Canadian grappling specialist Roland Delorme. Grant is a dangerous fighter in terms of his aggression, punching power and accuracy, yet his matwork leaves something to be desired on the world stage. This is an area Delorme has proven to be nearly unbeatable, having a functional grappling base few can navigate safely. Grant will be game, but Delorme’s own boxing and slick takedowns put the fight into his world, eventually locking up the sub in the first half of the fight.

Phil Harris vs Louis Gaudinot: A fun Flyweight bout, UK fighter Phil Harris will face TUF stand-out Louis Gaudinot. Harris has struggled at this level for a while, but stands as a firm test due to his judo base and smart use of his long arms in striking exchanges, making him a difficult opponent to pull out of his game. Gaudinot is small enough for Flyweight, yet the traditional martial artist packs real power and functions well in pitched fights, going for smart offense and dictating most of his encounters. Against Harris, Gaudinot faces a strong defensive opponent, yet can win based on activity and making a stronger impression on the judges due to his forward movement. Harris will wheel and counter, but Gaudinot can close distance and win every firefight, taking a decision win in his opponent’s home town.