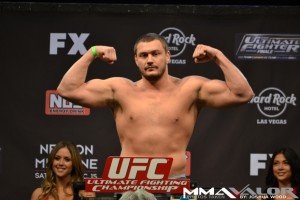 The days of craving for more televised MMA events have long been forgotten.

This coming weekend will see three live major MMA events take place in less than a 24 hour span. Titan FC, Bellator will be holding events on Fridays night, while the UFC is in China and their card will stream over Fight Pass in the early morning on Saturday. These three fight cards feature some exciting bouts, 11 of which I’ve predicted below.

Yes M’Pumbu is the former champ but let’s be honest, he has nothing on Rampage. M’Pumbu’s best bet will be to stay on the outside a jab his way to a decision. Jackson won’t allow that though and will get inside and punish the former champ. Rampage Jackson by TKO

While maybe not as one-sided as the other light heavyweight tournament bout, King Mo enters as the clear favorite. Unless Lawal cannot get the fight to the ground I see no problems with him advancing to face Rampage. King Mo by TKO

Nunes did not favor well in his Bellator debut but gets a shot in the tournament nonetheless. Bassette though is taking a big step up in competition and I think it will end up being too much. Nunes by Decision

Martinez has looked very impressive during his time with Bellator and has reeled off 7 consecutive first round wins. Yamauchi though is a tough matchup for Martinez, especially if it leaves the opening round. Yamauchi by Submission

Richman has only lost to Russians inside the Bellator cage, so doing some simple MMA Math we can predict the winner here. Green is a young up and comer but he is not Russian, thus he cannot win. Richman by Decision

Cleve is coming off a nice win in his Bellator debut and draws the promotional newcomer in Weichel. I have Weichel shocking people by winning the tournament (Click here) so for him to do that he’ll need to defeat Cleve. Weichel by Submission

The return of Titan FC will be headlined by two former UFC fighters. Gurgel hasn’t fought in over a year and before that was just 1-4 so the odds are against him. Ricci is coming off a loss but will have a big height and reach advantage that should help earn him the victory. Ricci by Decision

The long absence of Hathaway is very concerning, especially facing a big welterweight like Kim. Hathaway last fought in September of 2012 and most enter the cage with little to no ring rust to stand a chance in there. I don’t see that happening though and expect Kim to grind away at Hathaway until the later rounds where he will find a finish. Kim by TKO

This heavyweight bout has the potential to end abruptly or painfully drag on way too long. I think we dodge a bullet here though and the fight ends within the first two rounds. Jordan by TKO

Both fighters are coming off losses and are most likely fighting for their jobs. The fight will be a close one and entertaining, but at 2-5 inside the Octagon I cannot pick Phan here. Lee wins by decision

Hioki was supposed to be a challenger for the featherweight title but since entering the Octagon he has been unable to produce. Menjivar hasn’t been producing either recently so something has got to give or at least lets hope. Hioki has faced much tougher competition in the UFC and has more outs than Menjivar so I’m leaning in his direction. Hioki wins by submission

You could put together a “super-card” with the 11 bouts listed above, but who would be on the main card? Most importantly though, who would be the headliner?