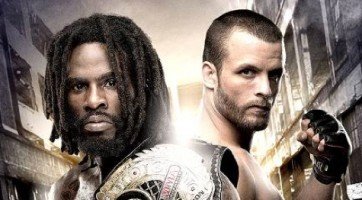 The welterweight tournament might have went up in flames before it even started, but Bellator managed to put on a solid show all around, capping off Bellator 112 with an outstanding title fight.

Here’s what caught my eye tonight:

Nathan Coy vs Paul Bradley: A rematch from early in both men’s careers, Coy showed you can teach an old dog new tricks and flipped the script on his old competitor. The story of this fight was Coy’s left hand, constantly zapping Bradley on his undefended right side; reducing his face to burger. Bradley, for all his big stage experience, has never learned to stop strikes to the right side of his head and seldom changes gears during a fight. While Coy isn’t a spring chicken, I do like that he’s putting that wrestling grind into new tactics and fleshing out his game to make the strongest run possible.

Jesse Juarez: On the opposite end of the spectrum from Nathan Coy is Jesse Juarez, who found himself on the losing end of a decision in the tournament at Bellator 112 and showing how much wear is on his body. While Juarez isn’t exactly a dinosaur at thirty-two years old, his knees and overall reaction speed were showing the four hours of combined fight time in his career. While Juarez can still be dangerous in the early goes of a fight, the blood is certainly in the water after this performance, and expect younger fighters to hunt him down and benefit off of his name.

Pat Curran vs Daniel Straus: While Bellator’s tournaments are the butt of constant jokes, their title fights are among the best in the sport, and this one was no exception to that rule. Curran had his back against the wall here, given an immediate rematch that was largely unpopular with fans, but he came out with an augmented game plan that pushed Straus to the brink as well.

Straus himself used a new offensive style that focused on a left hand, throwing it at several angles and with off-time tempo; catching Curran hard in every round. This odd shuffle punch was just what Straus needed to get around Curran’s fundamental boxing game, and nearly won him the fight early when he floored the former champion.

With the score cards in limbo as the 5th round unfolded, Curran hit a takedown and gutted out a slow choke, working an RNC for a minute straight with tiny adjustments sinking it tighter and tighter. Straus had given everything he had and as Curran constricted more, he couldn’t hold on to see what fate the score cards held for him. An incredible showing from both men at tonight’s Bellator 112 and one that whets the palate for the future of the Featherweight division.