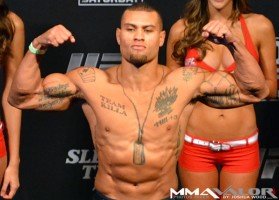 With 2014 just beginning, the UFC is without many of its top draws and UFC 169 didn’t actually help in that matter.

Anderson Silva is out for the foreseeable future. Georges St. Pierre is not coming back anytime soon. Brock Lesnar is in the WWE. Cain Velasquez is out for much for the year. Anthony Pettis is shelved until at least the middle of the summer. The company needed a strong, breakout showing from potential the stars that lined the UFC 169 card. Instead, the only people who left the tri-state area feeling worse were the Denver Broncos.

If we pretend like the UFC 169 prelims didn’t happen and just skip straight to the main card.

Abel Trujillo (pictured) and Jamie Varner started out the PPV portion of the card in violent fashion, proving both men are incapable of putting on a boring fight. The flyweight wrecking machine, who can’t make 125 pounds, John Lineker, was stifled by Ali Bagautinov, killing any hopes as a potential title contender. The win for Bagautinov, while important, did not leave fans clamoring for a title shot. In a heavyweight clash that was all but guaranteed to end early and brutally, saw Alistair Overeem earn a tactical, decisive victory over the shopworn Frank Mir. While a win certainly helps Overeem’s cause, neither man came out of the potential “loser leaves town” looking shiny and new.

In one of the more frustrating performances of the night, Jose Aldo cruised to decision victory over Ricardo Lamas. Aldo is easily one of the best pound-for-pound fighters in the world, poised for breakthrough status. However, in instances where he seems classes above his opponents, he chooses to cruise, take his openings and hammer out a decision. Aldo has the potential to become the next big thing in the UFC at a time when the promotion is searching for one. Hopefully an anticipated superfight with lightweight kingpin Anthony Pettis will help to bring out the best in Aldo.

While Aldo’s performance may have been the most frustrating for fans, the main even was likely the most disappointing to the UFC. Renan Barao, he who is unbeaten in his last 31 fights, had the opportunity to show the world what artistry he is capable of putting on display. His opponent was Urijah Faber, likely the UFC’s biggest star under 155lbs, with his third shot at UFC gold. If Barao had won, his streak is still alive and he would have two wins over a beloved figure. If Faber had won, one of the UFC’s most marketable stars now has a UFC belt around his waist. A win-win right? Wrong! Thanks to what most would describe an early stoppage by Herb Dean, Barao emerged as the victor in unceremonious fashion. Barao certainly had Faber reeling but the stoppage had more people questioning the decision than celebrating the victory. Faber comes out a fighter who has lost to the champion twice while Barao is a champion who was “gifted” a victory.It is pretty hard to market either fighter under those circumstances.

All in all it was a pretty rough night for the UFC. But at least they have their golden girl Ronda Rousey coming up at UFC 170. Who would have thought, women coming to save the day in the UFC.