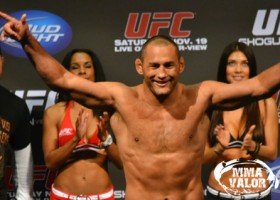 With a myriad of events between Fight Night, Fight Pass and PPV, we have live UFC entertainment nearly every weekend. For sports fans, this is a great era to live in, where any night can be one of thrilling battles, vicious KOs and dazzling submissions. For sports bettors, it means something else: More opportunity for money.

A quick look at your sportsbook of choice and you’ll see all kinds of outstanding betting opportunities coming to you in the next few months. Below, I’m going to run over a few interesting picks so we can determine where the money is, as well as where the danger is.

A rematch of one of the best fights of its era, Mauricio Rua will look for back to back KOs and a bit of revenge. Meanwhile, Henderson is in serious danger of forced retirement with his current losing streak, and a high-profile win here can prove naysayers wrong and give Henderson a few more bouts before calling it a day.

This fight is dealing with two battle-worn fighters who have a tendency to show up hurt. While Henderson has been functioning fairly well as of late considering his age, Rua looked like a man possessed last time out, while looking like a man defeated just a few short months before against Sonnen. With so much variance in both men’s capabilities, this fight is terrifying to play and with the amount of options we have open to us, it’s one I’d recommend enjoying while sitting on your wallet.

Two fighters busy racking up wins, Ryan LaFlare will take another step in his career, taking on Uriah Hall’s spoiler in John Howard. Both fighters are well-rounded, with LaFlare’s functional kickboxing and mix of attack patterns being difficult for other fighters to cue in on, while Howard has been out-toughing the competition for years and uses his size well at Welterweight.

While I think Howard will gain a bit of momentum in the odds for beating Hall and Siyar in convincing fashion, he’s essentially drawing dead against LaFlare. LaFlare has some of the best MMA functional wrestling I’ve ever seen, along with a smart use of kickboxing to keep himself safe and set up those takedowns. With Howard needing to close distance on a taller and longer foe, the takedowns will come easily to LaFlare, as will the decision win, and hopefully at good value for your dollar.

A women’s fight between two lionesses, Sarah Kaufman will look to repeat her feat from yesteryear, putting away Baszler once again. Both fighters have been through fire more than once since then, with Kaufman maintaining a healthy career, while Baszler has bitten off more than she can chew on several occasions. As the sole female fight on this card and with careers in the balance, this is pivotal for both ladies.

Recommended play: Kaufman or Over

This is a matter of how badly some female degenerate and Baszler has always mentally been weak. Having suffered another leg injury after TUF, I’m suspecting her body follows and that Kaufman runs away with this one. I think we’ll be seeing a lot of Kaufman boxing and Baszler hanging from the outside and shooting unsuccessfully, drawing this one into deeper waters. I recommend hitting Kaufman at the odds listed above, but if the price is high, don’t be afraid of the Over. Baszler is too wily to follow to the mat and unlikely to be KO’d leading to a late stoppage or decision that can make the over a better option all around.

From WEC champion to curtain jerker for a Fox event, Mike Brown is the definition of a faded champion. Coming off a brutal KO at the hands of Steven Siler last time out, Brown will look for one last win, taking on gritty striker Estevan Payan. With a loss sending either man out of the Octagon for good, you can expect some firepower being thrown here.

The moment someone retires, you know their mind isn’t into fighting, and this is particularly true at the top level of the sport. With Brown having called it a day after a win against Pineda, he was convinced to come back and was crumpled in one shot by Siler, again announcing his departure. To return yet again is folly, even if it is in one’s home town, and Payan isn’t someone to show much compassion in this situation. Brown has potential to get this to the ground and do well, but considering his mindset and the fire Payan throws, I don’t see this being a happy farewell for Brown, as Payan cleans his clock inside the first round.