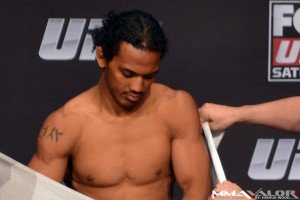 The landscape of the UFC lightweight division would look completely different if Benson Henderson hadn’t gotten the nod in three controversial decisions.

In the UFC on FOX 10 main event, Benson Henderson faced the former Strikeforce lightweight champion Josh Thomson. Henderson, the former UFC lightweight champion, was coming off the first round defeat at the hands of Anthony Pettis in which he lost his belt. Thomson was scheduled to face Pettis for the title last month but took this risky fight instead of waiting at home while Pettis recovers from injury.

Like so many other Benson Henderson fights, his bout with Thomson was extremely close. It been since 2010 in the WEC that Henderson has actually finished a fight.

In their bout, Thomson was able to take Henderson down at will, which on many fans card had put “The Punk” up two rounds to none heading into the third. Between rounds Thomson told his corner that his right hand hurt and that he thought it was broken. The fight changed at that moment and Benson Henderson took advantage of it to get back into the fight. Despite the hand that was clearly bother him, Thomson didn’t wilt and the final three rounds of the fight were close.

On the extremely unofficial scorecard of my twitter timeline, Josh Thomson had defeated Benson Henderson 48-47 by winning rounds 1, 2 & 4. On the official scorecards though only one judge saw it that way. The other two judges gave the fight and the split decision victory to Henderson. To make matters even worse, one of them somehow even gave Henderson four rounds.

Everyone knows judging in Mixed Martial Arts is and has been a problem but no one has benefited more from this then Benson Henderson.The former UFC and WEC lightweight champion is considered one of the best lightweights in the world. His 8-1 record inside the Octagon backs up that claim, but there should be an asterisk behind that impressive record. The line between a record of 5-4 instead of 8-1 is as razor-thin as the decisions Benson Henderson has now become synonymous with in the UFC. The look of the UFC lightweight division could have looked a whole lot different.