The heavyweight division got a bit of a jolt Wednesday night as Stipe Miocic and Stefan Struve walked away with impressive victories at UFC on Fuel TV: Sanchez vs. Ellenberger. As part of the night’s main card the two fighters walked away with early knockouts, Miocic earning Knockout of the night honors.

Miocic (8-0) took on Phillip De Fries and the two went right after each other with reckless abandonment. De Fries stunned Miocic early but with neither fighter implementing any defense, Miocic quickly turned the tables and dropped his opponent just 43 seconds into the fight. It was the sixth win via knockout for Miocic and improved his UFC record to 2-0.

Struve (23-5) got the biggest win of his career in the night’s co-main event with a second round TKO over Dave Herman. Struve has been trying to add weight on his 6’11 frame and came into the bout noticeably bigger. The key to the fight though was the improved, more disciplined striking Struve displayed that ultimately dropped Herman in the second round. Struve cleaned things up with a little ground and pound to improve to 7-3 inside the Octagon.

The heavyweight division was dominated by wrestlers the last few years but with Junior Dos Santos and Alistair Overeem currently a top the division the strikers have forged ahead. Both Miocic and Struve fit that striker’s mold and the two exciting up and coming heavyweights will look to make some noise in their next outing. 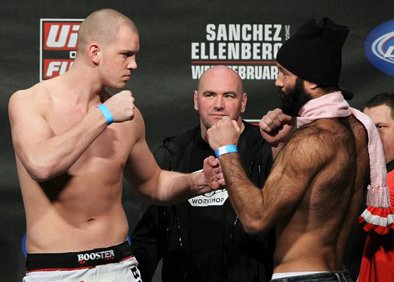