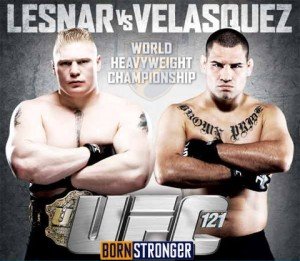 We are just days away from one of the most anticipated UFC fight cards of the year in UFC 121 in Anaheim, California. This Saturday the “baddest man on the planet” and UFC heavyweight champion Brock Lesnar will put his belt on the line against undefeated Cain Velasquez. The fight is being hyped as USA vs. Mexico by the UFC due to the possibility of it crowning its first Heavyweight champion from Mexican decent.

The card is stacked and must not be missed, so in honor of this we are going to do a prediction contest for a Born Stronger tee-shirt.

Leave you predictions and tie breakers in the comments section below before the first undercard fight starts and you’re entered to win. As a bonus for those that don’t win, if you can beat my picks you’ll win some stickers.

So let’s have those picks and make sure to tell your friends to also enter.