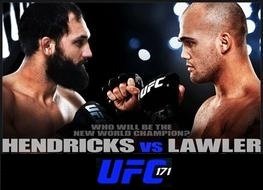 A champion is born, contenders are forged and broken, and overall mayhem ensued inside the cage at UFC 171 tonight. It was a night of solid performances with few cold spots, but worth it for the title fight alone.

Check out what was learned in the maelstrom that was UFC 171.

Justin Scoggins: A fireplug in the Flyweight division, Scoggins faced off against the notoriously slow Will Campuzano and made it a showcase fight. I like Scoggins use of functional karate mixed with wrestling, as his offense takes on a property of unpredictability few can match. While Campuzano wasn’t the perfect test for him, he was still a step up on competition for the young man and allowed him to glean precious ring time on the world stage, which is immeasurably valuable at this phase of his career.

Kelvin Gastelum: A fighter that’s slowly emerging as a potential title challenger in my book, Gastelum showed off an ever-expanding toolbox against Rick Story, using a hyper speed jab to great effect. Used to less effect was the 1990’s James Toney shoulder roll, which deflected some of Story’s shots early, but left him squared up and hands down on two occasions, nearly costing him the fight. At his rate of improvement Gastelum could well find himself knocking at contention within two years, provided he can iron out the few flaws in his game.

Jake Shields: Someone we won’t be seeing near the belt again is Jake Shields, who suffered a merciless beating from Hector Lombard. Shields is the greatest submission grappler of his era, yet his lack of entries against opponents unwilling to grapple always seems to cost him. His shot just isn’t what’s needed to make a ground fight happen, and with such limited kickboxing ability, he seems to be a sitting duck in too many fights. Chalk up another one to the stagnant talent pool of Cesar Gracie Jiu-jitsu and watch the remainder of Shields career, as this is as good as he’ll ever get.

Tyron Woodley vs Carlos Condit: A fight I declared as Carlos Condit’s nightmare in my Nemesis Top Ten for 2013, Woodley came out and executed the game plan he wanted to play. Having transferred the power of his wrestling shot into sneaking right hands as well as other devastating weapons, Woodley found Condit’s chin over and over in the first two rounds before Condit’s knee blew out on a takedown. While it was only a mildly satisfying fight in that regard, Woodley still looked outstanding and sets himself up for another big name fight.

For Condit, we’re seeing an odd evolution; honing his sword while neglecting his shield to rust. Condit has put together a murderous striking game and has long had the entangling bottom game to submit unwary foes, yet his takedown defense and ability to avoid strikes himself hasn’t improved in years. While being offensive is all well and good, any wrestler that faces Condit can simply hit the reset switch to any momentum gained on the feet by hitting an easy double. Considering Condit isn’t a true KO puncher, this leaves few outs for him to win against the big wrestlers lurking at the top of this division. While he should be able to handle more than a few top-notch opponents, this is a hole in his game that desperately needs fixing if he ever hopes to hold and keep the championship.

Johny Hendricks vs Robbie Lawler: This is what a championship caliber fight is supposed to look like in a competitive sport, and I’m glad Hendricks got to lay his demons to rest tonight after such a showing. Hendricks showcased a few new tricks tonight, having expanded on the boxing game he’d demonstrated against GSP, but having added a thudding leg kick and an emphasis on 70% power shots over the bombs of his past. This had the desired effect in keeping Lawler occupied for most of the fight, which his best damage being done in the 5th round as Lawler’s body began to shut down. While Hendricks is hardly a world-class striker, his chin, power and now improved output make him a difficult opponent to engage, and someone who can hold their own against anyone coming for the belt.

Lawler was certainly deserving of this title shot and didn’t make anyone question his worthiness tonight, nearly putting Hendricks away in the 3rd round, and keeping that pressure on late into the championship rounds. Lawler did everything right here, having the superior power shots for much of the bout, yet never burning himself out nor taking a break in the fight. I suspect if he could run this fight again, he’d have played it exactly the same way, and would walk away with that belt more than a few times, given how close he was to finishing the bout. In that, I can see this being heartbreaking, as he did everything right, yet still came up short. Considering his own improvement, you can expect to see him back soon and this likely won’t be the last title bout in his career.