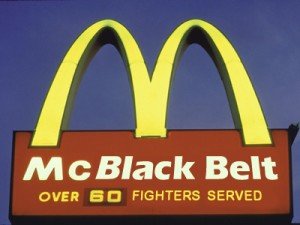 Rashad Evans was recently awarded his black belt in Brazilian jiu jitsu by Rolles Gracie, the morning of his fight Against Thiago Silva. Lately he has received a lot of negative attention by fans, thinking that since he does not train in a GI or have a national rank in BJJ, that he pretty much bought his black belt from McDonalds. Rashad is a very hard worker; He is a D-1 wrestling pedigree, 4thdegree judo black belt, and Gracie black belt in BJJ. He does not train with a GI, but he is what I like to call a hybrid in the jiu jitsu game, like so many others; GSP, Anderson Silva, Wanderlei Silva, and Nathan Marquardt. Even some institutions are pushing NO-GI trained fighters like; 10thplanet Jiu Jitsu, Next Gen, and a large Part of ATT. Also huge BJJ stars like Arona, and Monsoon gained their black belts from their performance in ADCC NO-GI competitions. Some people believe that having a GI is the only credible way to be known as a legit BJJ black belt, but I disagree. I still think you can be a master by putting in hard work, and Rashad Evans is a great example of work ethic in Mixed Martial arts. Hey, people don’t wear Gi’s in MMA anymore anyways.

Written By: Matthew Wheeler (Staff Writer)
Matthew is doing personal fundraiser to give to mercy corps. for the Haiti relief, please donate if you can.