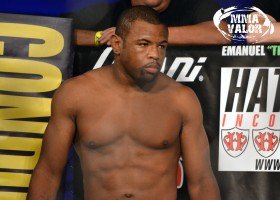 A title that’s long been gumming up the works will come loose at Bellator 113, as Attila Vegh returns to Bellator to face Emmanuel Newton. We’ve also got the beginnings of the Lightweight tournament, which is often the best in terms of quality for Bellator. The tourney features a few familiar faces, as well as some gritty new comers looking to make a mark.

So let’s dig into Friday’s Bellator 113.

Attila Vegh vs Emmanuel Newton: A fighter who has been shuffled out of his own title fight purely for business reasons, Attila Vegh it set to “unify” the titles against Newton. A karate stylist with a massive right hand, Vegh has had few problems in Bellator, yet Newton was his stiffest competitor in their match in a fight many thought he’d lost.

While Newton came out on the losing end of that first bout with Vegh, Bellator has tried their best to destroy him with intense match-making, yet he’s come through virtually unscathed, having handed King Mo two losses in impressive fashion. Now with an opportunity to snatch the championship and avenge a loss in one shot, we can expect the best Newton we’ve ever seen.

This is a great fight; though one Vegh really could have used a warm-up for, considering the pace Newton routinely sets. Vegh’s best weapon is his clubbing right hand and a great deal of functional strength, yet Newton is coming out of another five rounder where his opponent was similarly skilled. Newton needs only to avoid that power hand early, be very careful of telegraphing his kicks against a karateka, and grind away at Vegh to walk with this title via decision.

Patricky Pitbull vs David Rickels: A fight that should produce one half of the tournament final, Patricky Pitbull will take on David Rickels in a master-class brawl. Pitbull has been on the decline for a while now and his fight with Derek Anderson showed him mentally break down mid-fight, which isn’t good considering Rickels will operate much the same way.

While Pitbull has struggled with competition as of late, Rickels has excelled against most of the Bellator lightweight division, honing his craft and turning into a well-rounded battler. Having absolutely destroyed JJ Ambrose last time out, he looked more composed than ever and his loss to Chandler might have been the push he needs to hit that next level.

This should be fairly even, as Pitbull is still the better technical fighter and can club Rickels early. The longer this goes however, the more likely Rickels can use his superior strength to hit takedowns and his chin may see him into deep water where he has a chance to test Pitbull’s own resilience. Short of a fast finish by Pitbull, I see Rickels taking this one late by TKO or bloody decision.

Tim Welch vs Derek Campos: A decent scrap in the tournament bracket, Tim Welch will look to make his mark at Lightweight, taking on regional killing machine Derek Campos. Welch is a fairly standard wrestler who tends to out-tough opponents, but faces a serious threat in Campos and his blazing hand speed. Unless Welch can fight a perfect fight here, Campos should tune him up standing and sprawl out of the long-range shots Welch will need to move under those strikes, leading to a decisive decision win.