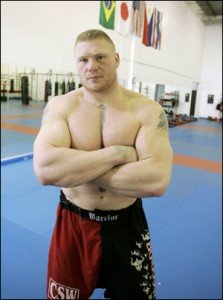 Minutes ago Brock Lesnar and Dana White finished their interview with ESPN’s Sportscenter. Lesnar had been out since July 11th 2009 due to illness that was confirmed today to be severe diverticulitis. Lesnar looking very concerned when discussing the event that transpired and threatened his life. Lesnar losted 40 lbs. while hospitalized for 11 days after checking himself in with a fever of 104 and stomach pain. When Lesnar was finally released he knew he would need surgery to remove a portion of his colon but had to wait until the swelling went down first. On January 5th Lesnar went in for a check up exam and the results shocked the doctors, Lesnar had not sign of diverticulitis and didn’t need the colon partially removed. Both Dana White and Lesnar called this a “Miracle” and even triple checked the results with CT scans and colonoscopy to the same results. Lesnar stated he has changed his diet but still looked good and back to around the same weight he was before the illness, discounting the reports that Lesnar was currently 220lbs.

Dana White announced that Brock will be back this summer and is still the Heavyweight Champ, which Lesnar quickly confirmed. White said that due to the lengthy illness and uncertainty the UFC went with the interim title fight between Shane Carwin and Frank Mir. The winner of this fight barring injury will face Lesnar to unify the Heavyweight title later this Summer. White did mention that if the winner of the interim fight was injured and unable to fight that the winner of Antonio Rodrigo Nogueira and Cain Velasquez would step in to face Lesnar. So watch out Heavyweights the big guy is back!