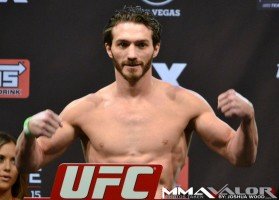 UFC lightweight Mike Rio gets his nickname from the iconic Marvel comic book character and like “The Wolverine” from the X-Men, there is more to him than meets the eye.

Mike Rio (9-1) was a member of Team Cruz on The Ultimate Fighter: Live season. The first and thus far only “Live” season left little time for character building and fans ended up missing out on a lot of back story on the fighters. Rio only fought once during his time in the house and thus didn’t get much air time. Really all that fans knew of Rio was that he was that he lost to Andy Olge via submission and was a high School and Collegiate wrestler.

What fans missed out on was learning why Mike Rio fights and the answer is not the traditional one that fighters usually throw out. He doesn’t fight for the fame, the money or because it was what he was born to do. Rio fights for Autism and wants to use fighting for the biggest Mixed Martial Arts promotion in the world to help raise awareness of the disorder.

Autism Speaks: Mike Rio recently became the South Florida celebrity spokesperson for Autism Speaks and will have the not-for-profit organizations logo on his shorts and banner when he steps into the Octagon this weekend.

Before we get into the Fight itself, please tell us about the cause you are fighting for, what is Autism Speaks?

Autism Speaks is an organization that spreads awareness about Autism and raises money in search of a cure for Autism.  I support them because my little brother has Autism and I saw how it was for him growing up and for my family and I want to help other people become more knowledge about the disorder and how to deal with it.

Autism is a disease that often gets over looked yet 1 in 88 children are born with it. How can people get more information on Autism?

Everyone can visit the website for Autism Speaks.  There is a lot of great information about the disorder at http://www.autismspeaks.org/

If someone wanted to get more involved and/or support the fight against Autism, how could they do that?

They can reach out to me on Twitter (@mikeriomma) or Facebook and I will point them in the right direction.

UFC on FX 8: Due to an injury Mike Rio was unable to make his official UFC debut on the TUF: Live finale. Instead he waited six months and face faced John Cofer, who was also a member of the 15th season of the reality show. A third round submission gave Rio his first UFC win and third victory in a row overall. This Saturday Mike Rio returns to action on the preliminary portion of the UFC on FX 8 fight card in Brazil.

You’re fighting Francisco Trinaldo on the FUEL TV portion of the UFC on FX 8 card. What does he bring to the fight that worries you the most?

I wouldn’t say I’m worried about him.  He’s a Brazilian kickboxing champion and has great stand-up.  But, I’ve prepared adequately for him like I do all my other opponents.

It has gotten a lot better.  I train with a really great Muay Thai coach that also works with Alexis Vila and Yoel Romero. I also went out to Texas to train with Colton Smith’s boxing coach. I’ve been practicing striking more than anything else.

Trinaldo also has a strong BJJ game to go with his Striking, How will your wrestling stack up against his BJJ?

Other than your own, which fight on the UFC on FX 8 card are you looking forward to the most?

The Tibau vs. Cholish fight because Tibau is also a local S. Florida fighter.

Headlining the card will be the hometown favorite Vitor Belfort, who’s had a lot of eyes on him due to his TRT usage. What is your stance on TRT in MMA?

I think everyone should fight without using any enhancements, unless of course it is medically necessary.  I want to win fair and square, otherwise what’s the point.

Last question, where can the fans find you at on social media?

On Twitter (@mikeriomma), Facebook or my Facebook Fan page. Thanks to my sponsors, Knights of the Octagon, Venum, Lexani, Rolling Big Power and my management ML Management, and coaches at Zen Jiu Jitsu.

Thank you to Mike Rio for the awesome interview, if you’d like to help raise money for Autism Speaks you can purchase his walkout shirt right here and 50% of the profits will be donated to support Autism Speaks.