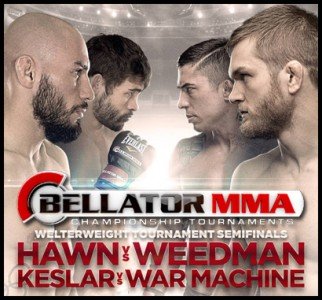 Slow motion heavyweight’s aside, Bellator 104 was an excellent card tonight, with a few future tournament place holders making their mark. It’s the Welterweights we all came to see though, with the finals of that 170lb tourney capping off the evening.

Here’s what caught my eye.

Kendall Grove: You’d be hard-pressed to find an MMA fan that’s never seen this journeyman, and with his back against the wall against Joe Vedepo, he came out with a win and mixed results. Grove has always been a tremendous talent and his striking is really starting to come along, not only standing, but from top position. Some of the best strikes he landed were counters and punches from standing position over a downed Vedepo, showing excellent timing and use of his giant reach.  What I didn’t like here was that he’s become complacent with his BJJ, going for the same transitions and submissions over and over. The same battle mind he’s applied to his striking could really make the difference in a scramble here; breaking his pattern and adding guesswork for his opponents.

Ron Keslar: A surprise in this tournament, Keslar fought a simple and perfectly executed plan, grabbing that submission in style. Keslar tends to be inconsistent in transitions, and being the more aggressive fighter could be the key for his future success like it was here. A relentless Keslar still has a hell of a fight ahead of him in the next round though.

Rick Hawn vs. Brett Weedman: An odd fight in terms of game planning, Weedman came into this fight using the exact same game plan as his failed bid in their first encounter. Working an outside leg kick and sporadic boxing, Weedman tried to get something going here, but Hawn’s sharper hands and superior balance in the clinch saw him cleanly walk away with the fight. This is a perfect example of when your corner can screw you over, as Weedman fought thinking he was clearly ahead, and never had the realistic input to know he’d clearly lost every round instead.

Hawn did nothing new here, but looked smooth on the feet, landed his power cleanly several times, and never gave an inch in the grappling department. Against Keslar, Hawn gives up some size, but as the better tactician and technical fighter, I see Hawn taking this fight and moving towards an uncertain title picture.