This weekend is a sports fan dream, Saturday Night you have UFC 169 from Newark, New Jersey and Sunday is the Super Bowl from East Rutherford, New Jersey. Typical the UFC holds a PPV event the night before the Big Game takes place, but to have them both in the same state is a first.

The Super Bowl is the biggest sporting event of the year but UFC 169 isn’t too shabby either. Like most of the eastern United States right now, New Jersey is pretty darn cold. Leave it to the UFC though to heat things up with the help of their ring girls.

UFC ring girls Brittney Palmer and Arianny Celeste did a photo shoot for a UFC 169 promo called the “hottest tailgate ever” in which the two are wearing only body paint at an incredibly cold looking tailgate party. The final promo picture of them at the tailgate, along with a video of the photo shoot can be found on the website “The Chive”.The two-minute long video can be found here but for those of you that are impatient or lazy, here are two screen caps to give you a little incentive to head on over and watch the video.

These pictures are on the risqué side, I mean come on it’s only body paint that they are wearing, but remember, you’ve been warned. 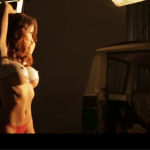 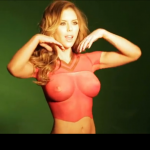 Make sure to head over to The Chive to watch the video though and see the final product, it’s worth it.