ONE Fighting Championship’s inaugural event was witnessed by a sellout crowd at the Singapore Indoor Stadium and millions more watching around the world on an internet stream. There were champions from all over the world on display but in the end it was two Filipinos who stole the show.

Chilson was able to take Kelly down but the Filipino is dangerous off his back and landed an elbow which opened up a sizeable cut above the Singapore based American’s eye. The fight was paused momentarily while the doctors examined the cut and when it resumed a wounded Chilson came out swinging.

The crowd sounded their appreciation but when the two men ended up clinching against the cage Kelly, who has submitted all five of his previous opponents, was able to wrap his arms around Chilson’s neck and sink in a rear naked choke. The American refused to tap, preferring instead to lose consciousness and the referee was forced to pull a victorious Kelly off his back.

“I am so happy because I was able to represent the Philippines and defeat a great opponent in Mitch Chilson. I have fought many times in the Philippines but this was my first international fight, the crowd were very loud but I did not think about that, I just focused on my opponent. I never have a game plan going into a fight, I always just find a way to win when I am inside the cage and fortunately that is what happened tonight,” he said.

There was a large contingent of Filipinos in the crowd and they went home happy after Folayang defeated A Sol Kwon in the final fight of the night. After an injury to Ole Laursen the highly rated Korean, who is on a six fight win streak, stepped up to take his place in the main event.

Kwon has extensive experience fighting in both Japan and Korea but this was his first opportunity to impress in front of a truly international audience. He came into the fight with a reputation as a trash talking, hard-hitting aggressive fighter but was surprisingly patient in the opening round.

Folayang was the aggressor landing a series of inside leg kicks as Kwon looked to counter strike and catch him on the way in. The Filipino, whose speciality is normally ground and pound, landed an eye-catching hip throw late in the round but his opponent sprung quickly back to his feet.

The blood pouring from a wound on Folayang’s eye at the end of the opening round bore testament to the accuracy of Kwon’s countering. The second round continued in a similar pattern with the URCC champion bringing the fight to his opponent who appeared a little reluctant to engage, despite enjoying success on the rare occasions that he did counter.

Kwon was seemingly well behind on the scorecards going into the third and final round and needed to make a big impression, but once again it was Folayang who was by far the busier of the two fighters. In the dying seconds the Filipino, who is legendary for his enormous heart and never say die attitude, burst forward with one final flurry to leave an indelible impression in the eyes of the judges.

The Filipino was bruised and battered and his nose appeared to be broken but he just kept on coming and will have won himself a lot of fans with this performance. 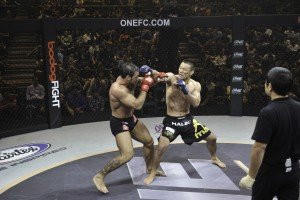 Earlier in the night two MMA legends, Japanese fighter Yoshiyuki Yoshida and the self-styled ‘New York Badass’ Phil Baroni, met in a match which has been five years in the making. ONE Fighting Championship is focused on featuring the best Asian and Asian based fighters and also bringing in the occasional big name international opponent with Baroni falling firmly into this category.

This match up was one of the most eagerly awaited of the evening and in the end it was the Japanese Judoka who prevailed with an extremely assured performance. Baroni has spent much of his career fighting at 185 lbs and with this fight taking place at a catch weight of 175 lbs there were always going to be question marks over his stamina.

In the end Baroni comfortably lasted the full three rounds and came close with a couple of guillotine attempts but it was Yoshida’s composure and control which caught the judges eye with the Japanese fighter winning with a unanimous decision.

Earlier in the evening Singapore’s own Radeem Rahman secured a quick stoppage win over Indian Karate expert Susovan Ghosh to the delight of the partisan home crowd. The roof almost came off the Singapore Indoor Stadium when Rahman made his entrance and he responded in style, putting on a Muay Thai clinic which forced the referee to step in and save Ghosh three minutes into the opening round.

His Evolve MMA team mates also impressed with Thai boxing world champion Yodsanan Sityodtong demonstrating that his skills are equally effective inside the cage. His opponent, Daniel Mashamaite, was more experienced in MMA and has won world titles at Muay Thai but was no match for the man who is known as the ‘Thai Tyson’ because of his devastating punching power.

Mashamaite was able to survive the opening round but only just as Yodsanan began to unload with vicious punches to the body. He seemed a little unsteady at the start of the second and the Thai fighter, who has been working hard on his ground game, moved in for the kill finishing the fight with a knee which sent his South African opponent staggering.

Speaking after the event Cui thanked everyone involved and vowed that this would be the first of many successful ONE Fighting Championship cards,

“I would like to thank all the fighters for putting on such a great show and making it a night for the fans to remember. It was fantastic to see so many fans turn out for our first event and I am sure they will have gone home happy because this card had everything, knock outs, decisions, submissions, the lot. People want to see action packed fights and tonight ONE Fighting Championship definitely provided them,” he said.

Andy Wang vs Zorobabel Moreira – Moreira wins by TKO after 1:59 of round two

Eric Kelly vs Mitch Chilson – Kelly wins by submission (rear naked choke) 3:10 of round one

Photo’s courtesy of ONE Fighting Championship