Silva/Sonnen, Ortiz/Griffin III, Cung Le/Patrick Cote etc.  All the big boys step to the Octagon beginning for the UFC 148 main card at 7PM PST.  If you can’t catch the fights on PPV on in person, you can catch the results here, as they happen.

Round 1:  Both men take the center of the cage and start feeling things out.  Easton of course bounces around as he tends to do, while Ivan Menjivar paces himself, throwing and missing a headkick.  Easton’s reach advantage doesn’t seem to be a factor as Menjivar lands and gets inside to throw shots.  The two fighters exchange high kicks.  Two spinning low kicks by Menjivar land and look pretty darn cool as well.  Nice low kicks by Easton, but Menjivar hits one of his own.  Good first round, I’d score it 10-9 for Ivan Menjivar.

Round 2:  The second round starts the way the first one ended with both fighters throwing nice shots.  Menjivar has found a home for the spinning low kick.  The two exchange straight right hands, and Menjivar seems to be the more accurate striker.  Easton throwing combos finishing with right hooks that are starting to land.  Easton is the more agressive fighter, stalking Menjivar.  Menjivar lands a high kick, and then a right hand, but neither seems to hurt Easton.  Nice lead body shot by Menjivar.  Flying knee by Easton at the bell lands to the chin.  Based on agression, it was clearly 10-9 for Easton.

Round 3:  The two bantamweights enter round 3, one round each on my card and they start immediately throwing combos.  Easton gets the better of the exchange and Menjivar resets.  Menjivar utilizes his high kick like a jab and lands it.  Menjivar misses a spin kick and Easton takes him down.  Easton throws to the body and head while Menjivar looks for an angle to attempt a submission.  Menjivar gets to his feet, and they are again toe to toe.  Another exchange punctuated with a right hand by Easton.  Easton was the more agressive fighter, and landed more shots this round again, so I give it to him 10-9, and thus the fight 29-28. 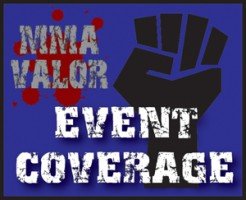 Round 1: Cody McKenzie has Ronda Rousey in his corner, so right off the bat, he’s in good hands.  Mendes closes the distance and lands a knee to the body.  He also lands a nice low kick.  Chad Mendes drops Cody McKenzie after catching a kick and drops him with a body shot.  He jumps on and gets the TKO finish early in Round 1.  Official time is 31 seconds of Round 1.  Mendes breaks the streak of fights going the distance.

Round 1: Maia comes out and immediately goes for a takedown.  He eats a couple of shots, but climbs up and takes Kim’s back.  Kim takes a quick lap, but Maia hangs on.  They go to the mat and Kim immediately stops fighting.  Maia lands a couple shots and then stops and gets up.  It appears as if Kim has injured his ribs on the left side of his body.  Fights over early, and for the second fight in a row, we end it in the first round.

Round 1:  Cung Le catches a kick, and kicks Cote’s other leg out, giving him lesson one in San Shou.  Cote is allowed back up and the two stand and start mixing it up.  Le lands a nice kick to the body and Cote misses a counter right.  Cung with a low kick followed by a short right that lands.  Cote counters with a nice body kick, but so far, Cung Le is the more accurate striker.  Cote looks for a takedown, but it’s not there.  Cung Le is a surgeon and hits Cote with a counter right that hurts him.  Le lands a short left and then escapes the counter.  Cote switches his stance, but eats another body kick.  Round 1 ends and it’s 10-9 for Cung Le.

Round 2:  The fighters open the second frame exchanging shots and Cote cuts Cung Le and in return, Le bloodies Cote with a counter right hook.  Cote is bleeding pretty heavily from above the right eye/hair line and Cung ups the ante landing a kick and left hook. Cote opens up and throws some big shots back, staggering Le for a moment.  Both fighters need to worry about pace, with 90 seconds left, they could gas in the third round.  Cote is the aggressor now, and he’s pacing Cung Le down, but Le lands a counter left.  Nice knee, and right hand combo from Lee.  Cote lands a big right that stuns Le.  These two are leaving it all in the cage.  They clinch and Cote lands a series of uppercuts.  The second round ends as the fans cheer the fighters.  I’d score that round 10-9 for Le.

Round 3:  The two exchange and Le is hit with a low blow.  He says he’s fine and they continue.  Cote is pressing the action, and Le lands short accurate counter strikes.  Patrick Cote pushes Le up against the fence and clinches with him.  He throws some knees and a very nice spinning back fist.  Not a lot of shots landing as the two fighters get a little wild.  Cote again holds Le against the cage and throws some knees to the leg and body.  Le trips Cote down and Cote immediately gets to his feet and goes for his own takedown but gives up.  Le lands a nice right hand, then another.  Cote presses forward but is backed up by a kick by Le.  One minute left and Cote opens up, but Le counters over the top with a right hand.  Le throws Cote with a minute left and Cote struggles to get to his feet.  Cote stays on the ground as time expires.  Second round was razor thin, but I score the round for Le and the fight for Le 30-27.  Each rounds was close though.

The judges officially score the fight, 30-27 across the board for Cung Le.

Round 1: Here we go, Tito and Forrest for the third time, and the last fight in Tito’s storied career.  Tito and Forrest meet in the center of the cage and we’re off.  Tito throws a wild right hand, and almost takes a counter high kick in return.  Tito secures the takedown less than a minute into the fight and works from Griffin’s open guard.  Forrest escapes and they are again standing. Tito is eating some shots now and looks stunned.  They exchange missed high kicks.  Nice low kick by Forrest and Tito shoots for a single leg, and Forrest defends.  Nice body kick by Tito.  Forrest lands some leg kicks and Tito seems ineffective standing.  Nice superman punch by Griffin.  The first round ends with a scramble and takedown attempt by Tito.  Forrest wins the round 10-9.

Round 2: Round 2 opens with Tito hurting Forrest with a big right hand.  Forrest recovers and clinches with Tito and lands some knees along the fence.  Tito pushes out of the clinch and we’re back to standing and trading.  Nice jab by Forrest followed by a leg kick.  Tito looks to be in slow motion but they trade big rights and lefts.  Tito lands a stiff right hand.  The crowd takes turns chanting Tito and Forest as the two men go toe to toe landing some big shots back and forth.  Forrest lands consecutive leg kicks. Tito is getting hit now with most everything Forrest throws.  Tito looks out of gas, and in bad condition here.  The final minute of round two finds Forrest in control as Tito misses single shots and eats combos.  Tito has a knowing look in his eyes as he walks back to his corner after dropping two consecutive rounds 10-9 Forrest but could be 10-9 Tito based on the knockdown.

Round 3: Tito eats a right hook, and he pushes Forrest back.  Tito is getting stung by eveything Forrest throws.  Tito drops Forrest with a punch and now takes him down.  Forrest might be still a little stunned, and Tito looks for room to throw punches.  Tito throws a short elbow, but his cardio might be limiting his ground and pound.  Tito lands a nice elbow.  Forrest tries to capture an arm, but Tito pulls it out and tries to posture up. Tito passes and Forrest stands up.  Two minutes left, both fighters stand and trade.  Tito looks exhausted. 30 seconds left in a hall of fame career and Tito seems to not have the starch to go after Forrest.  Tito wins the third round, 10-9.  Forrest immediately walks out of the cage, not waiting for the result.  Dana White chases him down.  Forrest is back.  Tito knocked Forrest down in both the second and third, but I’ve got it scored 29-28 Forrest Griffin.

Judges all score it 29-28 for Forrest Griffin.

Round 1: Sonnen immediately takes Silva down and starts throwing elbows and short right hands.  Sonnen is going full bore on Silva as Anderson is trying to escape with no success.  Sonnen passes to half and punches down on Silva who has no idea how to escape so far.  This is a replay of the first fight so far. Sonnen is dominant from the top and works for a kimura, but Silva fights it.  With a minute and a half left in the round, Chael is on top, landing strikes.  Chael works into mount with 49 seconds left and punishes Silva from the top. The horn sounds and Round 1 is Chael Sonnen’s  10-9.

Round 2:  Round two opens and Chael has Anderson agaisnt the fence.  Anderson thinks about a high crotch, but it’s not there.  Chael is burying his head in Anderson’s side, pushing him, but Anderson escapes and lands a couple counter shots.  Chael whiffs on a spinning backfist sending himself headfirst into the fence.  Silva lands a huge knee to the belly and then unloads on Sonnen as he folds up and the referee stops the fight.

If you missed the UFC 148 undercard actions you can see the results here.