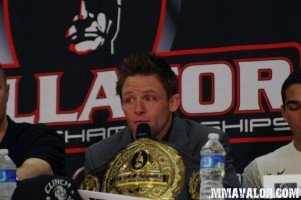 Former Bellator featherweight champion Joe Warren returns to action tonight in the Bellator 80 main event after losing his belt eight months ago to Pat Curran. Following back to back brutal knockouts, the once self-proclaimed “Baddest man on the Planet” is in desperate need of getting back to the form that saw him knockout Joe Soto at Bellator 27 to win the featherweight championship.

Looking to keep Warren from accomplishing that will be Owen Evinger (7-3), who also comes in off back to back losses. Evinger has fought twice for Bellator, losing both via first round submissions and enters the cage at Bellator 80 the heavy underdog.

Warren(7-3) will be fighting at bantamweight for only the second time in his career and the first time only lasted 64 seconds. The Greco-Roman wrestler must get back to his roots tonight and put Evinger on his back. Even though his opponent has yet to win via knockout, testing your luck in the standup hasn’t been working so get the fight to the ground ASAP. Watch for the submission attempt from Evinger and ground and pound his way to a victory.

Evinger has nothing to lose, he’s a massive underdog and facing a former champion but that makes him dangerous. Warren needs a win bad; he’s coming off two horrible fights and has the weight of the world on his shoulders. If the former champ can just go back to the basics in tonight’s Bellator 80 main event he can right the ship and stand in the middle of the cage with his hand raised once again.