Things have been slow the last few months with regards to change amongst the MMA rankings. Injuries to champions and top fighters along with dominate champions have limited the movement but things are beginning to pick up. In November the UFC saw one of its champions return to action after a long layoff due to injury and the final month of the year will see many highly ranked fighters step into the cage.

The biggest fight in November was the return of UFC welterweight champion Georges St. Pierre as he took on the interim champion Carlos Condit at UFC 154. St. Pierre looked rusty in his unanimous decision win but once again proved he’s one of the best fighters in the world. Another welterweight that also fought at UFC 154 was Johny Hendricks who moved into the #4 spot this month after his knockout of Martin Kampmann. Hendricks now finds himself nipping at the heels of the champ and a possible title fight looms in 2013.

Two fighters dropped off the MMA rankings this month as former lightweight champion Frankie Edgar is dropping down in weight to face featherweight champion Jose Aldo in February. Replacing him and making his debut at the #5 spot in the lightweight division is the Bellator 155 lbs. champion Michael Chandler. In the flyweight division Yasuhiro Urushitani lost to John Lineker and was replaced in the #5 spot by Louis Gaudinot, who appears on the ranks for the first time.

December will have four (yes I said 4) UFC events with title fights in the lightweight and heavyweight division. A total of six top five ranked fighters as well as 10 fighters “knocking on the door” are in action in December which could make the yearend rankings look much different. 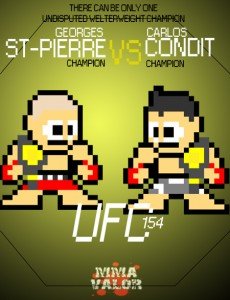 GSP returned to action at UFC 154

Knocking on the door: Darren Uyenoyama