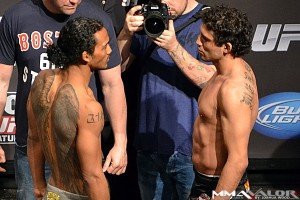 The champ is no stranger to tough fights, and Benson Henderson was more than ready for his test last Saturday, taking on Strikeforce champion Gilbert Melendez. The first round saw Melendez get into Henderson’s face and pressure the champ with overhand rights and striking in the pocket, taking the round on every score card and potentially setting the pace for the night. The highly adaptable champion wasn’t having it though, altering his attack patterns and slowly putting together a mid-fight game plan that allowed him to edge out Melendez on two score cards, retaining his title.

Some agreed with the decision and some didn’t, but with that bout in the rear view, we turn out eyes to what looms in the future for Henderson, and what bets can be made as his next opponent is revealed.

With Dana White declaring Maynard vs. Grant will be a title eliminator, we have our first two possibilities for Henderson, starting with two-time title challenger Gray Maynard. Having fought to a draw with Frankie Edgar in his first title bout and been KO’d in the championship rounds in their immediate rematch; Maynard was sent back to the middle of the pack.  After a frustrating fight against Clay Guida that saw Maynard walk away with a decision win, he was scheduled for Joe Lauzon, but an injury forced him into recovery and eventually into a fight with TJ Grant for the title shot.

You might be wondering why Maynard is a favorite here, but this is a fight I’ve been calling for two years, having expected Maynard to be Henderson’s first title defense after beating Edgar the first time.  Having quietly improved throughout the years, Maynard has added one of the best pure boxing games in the business to his All-American wrestling status, making him a complete fighter and ready for a championship.  What the fight with Melendez proved beyond the shadow of a doubt is that Henderson has very few weapons in the pocket aside from a rising knee and odd punches that lack power.  Despite having few KO’s on his record, Maynard is a crippling puncher with exceptional technique, who can land his power and walk through Henderson’s offense to do it.  While Henderson can always retreat and work his kicking and long-range punch game, Maynard’s takedowns may be enough to put Henderson down a time or two and steal close rounds away from the champ.  With a chance to finish and keep the score cards honest, Maynard gets my nod as the next champion, should he make it past TJ Grant.

The other side of the title eliminator features a lower-level Welterweight who has turned into a top-level Lightweight in a few short years.  TJ Grant was always a fan favorite for his wild transitions and cut-throat muay thai game, but really came into his own when he made the plunge to 155lbs.  Having gone undefeated thus far with a submission over Shane Roller and brutal KO of Matt Wiman, it’s hard to argue he’s not due for a strap if he can take out Maynard.

I’m a huge fan of Grant myself and he does have some tools that make him a nightmare against the wrong guys.  His vicious muay thai game, rapid submissions and one of the fastest takedowns in the business have made him a multi-level terror, yet he’s had issues in his career with holding a position and avoiding takedowns himself.  Henderson can win this one if he’s smart about the shot and catching Grant coming in hard, as I’m fairly certain Grant can’t do anything to him from bottom.  However, Grant does have the same out as Melendez if he can get into his face and relentlessly attack from the pocket.

While the above two men have the privilege of the next title shot, both are somewhat injury prone and the battle between the two of them could easily see the victor put on a shelf for a spell.  This would leave the door open for a dreaded immediate rematch against Henderson’s latest opponent in Melendez, and while I hate the concept of immediate rematches in close fights, this would be the most likely direction.

I, for one, agreed with the decision in the Henderson fight, and don’t see this one going better for Melendez for several reasons.  One is that Melendez, like everyone from the Caesar Gracie Jiu-jitsu stable, lacks a real head trainer.  This is why they’re cornered by a boxing coach and a teammate, which leads to an odd dynamic and lack of substantial in-fight changes.  In the first round, Melendez had a game plan that won him the scorecard unilaterally, yet when Henderson made adjustments in his offense, Melendez didn’t change anything at all.  When dealing with an athlete like Henderson, you can’t rest on your laurels and expect results to be different, and I would expect the second fight to play out in a similar manner to the first with a Henderson win.

Could Josh Thomson get his chance against Benson Henderson?

A long-shot title but stranger things have certainly happened.  In the instance of an injury in Grant vs. Maynard and a lack of interest in facing Melendez again, Josh Thomson seems an attractive choice for a title shot of his own.  A former Strikeforce champion himself, his rubber match with Melendez was just shy of complete robbery on many score cards, and the head kick KO of Nate Diaz certainly makes a strong case for a step up in opposition.  Don’t count on seeing it, but Thomson could ride a wave of momentum right into a title shot.

Thomson’s history of injury makes him tough to wager on, yet people seem to have forgotten exactly how great he is.  One of the fastest lightweights when his legs are sound, his speed is complimented by a depth of skill in all aspects of the game; a strong mix of unorthodox technique and simple functionality.  Having more power than Henderson and a competitive degree of speed and wrestling, Thomson could keep this interesting, although I feel Henderson would take more rounds ultimately and retain the title via decision.