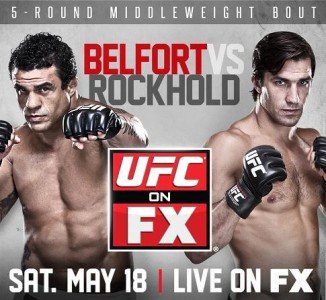 The UFC will return to the scorching hot battleground of Brazil for UFC on FX 8 with a card packed with local talent.  While injuries have done some serious damage to the top of this card, the main event remains intact and holds title implications for the victorious.  One of Brazil’s first MMA heroes and current superstar, Vitor Belfort will once again take to the cage, facing the last Strikeforce Middleweight Champion Luke Rockhold.  We’ve also got Rockhold’s former foe and sub grappling legend Ronaldo “Jacare” Souza making his debut inside the Octagon, taking on a rising force in Chris Camozzi.  There are plenty of others waving the green, yellow and blue as well, so let’s dig into this card and see what’s cooking in South America.

A fighter who rode on his popularity for years and is now tearing his way back to the top, rejuvenated Brazilian star Vitor Belfort will look to make a statement here.  Having some of the fastest punches in the game, even at the age of 36, and possessing crippling power in his strikes, Belfort earned this fight on the merit of a devastating KO over Bisping in his last outing.  Having discovered a chemical fountain of youth that oddly only works in Brazil, Belfort is perhaps the best he’s ever been and stands a firm test to any man at MW.

Rockhold is one of the best home-grown fighters out of Strikeforce and stands ready to work his way into the 185lb UFC mix.  A life-long wrestler who has added to his combat sports game piece by piece, Rockhold comes into this fight with a seamless grappling game, nearly impenetrable takedown defense, and a long-range kickboxing game that’s the envy of many fighters.  Thought he isn’t known for huge KO’s, his five rounds of endurance and wealth of skills make him one of the top guys in the division right off the bat.

This is a sad fight for me, as I really like Rockhold, and outside of Brazil, I think he wins this one with ease.  As long as Belfort is permitted to juice up with a blind eye to his TRT use, he stands as Alistair Overeem once did; physically enhanced to the point of ridiculousness.  It’s the combination of this raw power, years of experience, a lightning-fast power punch and Rockhold’s chin that make a short fight here. Rockhold doesn’t really have the takedowns to give Belfort trouble until later in the fight, and will be playing an outside striking game with someone who has no fear of fast entries into clinch.  I see a short fight as Belfort closes the distance to get Rockhold on his bicycle and tags him relentlessly against the cage for an early KO win.

Ronaldo “Jacare” Souza vs. Chris Camozzi: One of the most dangerous fighters in the division today, Jacare knows he’s on short time to make an impact at 33 years old, but take a step in the right direction against Chris Camozzi.  A lot of folks are writing Camozzi off immediately here, yet his rapid movement and slick technical ability make him a tough foe to deal with on short notice, considering Jacare was training for a much more stationary striker.  Souza should be able to make adjustments here with his power striking and takedowns to catch up to his foe, doing enough to win a convincing decision.

Rafael Dos Anjos vs. Evan Dunham: An odd pairing, as the quietly ascending Rafael Dos Anjos meets projected future titlist turned minor flop in Evan Dunham.  RDA is a true sponge for combat, having built an incredible muay thai game onto his already lethal grappling skills, making his a multi-level threat.  Dunham’s own unique style poses problems for RDA, but I feel the Brazilian’s leg kicks, frightening bottom game, and smoother flow in the battle will see him take a decision win. 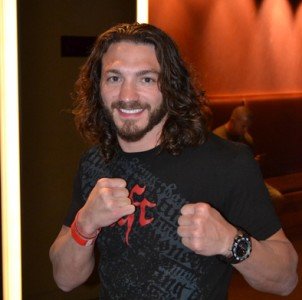 Francisco Trinaldo vs. Mike Rio: In interesting pairing of TUF Brazil versus standard TUF, the monster of a Lightweight in Trinaldo faces American wrestler Mike Rio.  Rio is in a tough spot here, as he’s a good wrestler facing elite-level opposition, and Trinaldo stands as a stiff test for him.  A monster-sized lightweight, Trinaldo’s power and legitimate skill set looks to match poorly with Rio’s strong-style wrestling and BJJ.  It could be close, but Trinaldo is the tougher man and should walk with the victory via late TKO.

Gleison Tibau vs. John Cholish: The closest fight on the card by my estimations, long-time Lightweight gatekeeper Gleison Tibau faces part-time fighter John Cholish.  Tibau’s worth is well known after eighteen fights inside the Octagon, but Cholish is still somewhat of a mysterious quantity within the sport.  Having wrestled since he could walk and with a build suited for boxing, Cholish has skills and physical characteristics of a fighter, but lacks top-level experience with such a lax pace in his fight career.  That’s the killer here, as Tibau has been in there with the best and rarely looked bad.  Cholish also has a freakishly long neck that should fit perfectly into a Tibau guillotine, making for a fast end to this fight via submission.

Fabio Maldonado vs. Roger Hollett: A fan favorite, but someone fighting at the wrong weight class, Fabio Maldonado looks to keep his job against Roger Hollett.  Maldonado comes in off of a life-altering beating at the hands of Glover Teixeira, and I sincerely fear for his continued career against heavy hitters.  Lucky for him, Hollett isn’t a power hitter, but he certainly is a solid grappler and could cause issues with his takedowns and grappling acumen.  A closer fight than many would think, Maldonado skirts early danger and eventually turns it on late, winning by TKO late in the 2nd round.

Jussier Formiga vs. Chris Cariaso: Two of the precious few Flyweights in the UFC and two guys who couldn’t be different in terms of skill set.  Formiga brings a murderous BJJ game to the table, with a history of unrelenting grappling control that has seen him dominate all but the very best in the world at 125lbs.  Cariaso is an underrated fighter with a smooth flowing muay thai game and true guts, but his history of dealing with this style of grappler isn’t reassuring.  Cariaso will swing for the fences any chance he gets, but Formiga has this in the bag with his composure and pressure, hitting a submission in the 2nd round.

Look for more UFC on FX 8 coverage in the coming days, including live results this Saturday.