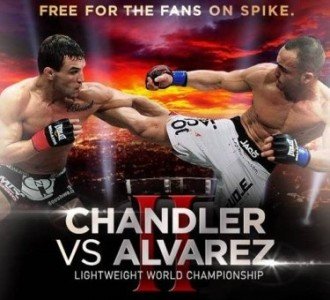 Tito Ortiz managed to save us all $45 by busting his neck and making Bellator 106 a free event, so cheers for that! All joking aside though, this is an amazing card for Bellator with some of the best matches possible with their roster, making it well worth checking out. Especially now that is free!

With three belts on the line, we have a lot of ground to cover, so let’s get at it.

155 lbs. Title Fight: Michael Chandler vs. Eddie Alvarez: A rematch of the best fight Bellator has ever staged, Michael Chandler will look to keep his title from the man he defeated for it. Having shocked the world in his fight with Eddie Alvarez, Chandler has made further strides in his career, convincingly keeping the title against tough battlers in Rick Hawn and David Rickles. With dedication in the gym and the execution of a veteran, Chandler has turned himself into the premier boxer/wrestler in the division, and will look to keep Alvarez at number two through another strong effort.

Alvarez has been in the MMA news more for his legal battle with Bellator than his fighting prowess; railroaded into a year of inactivity due to the litigations. An outstanding fighter in every regard, Alvarez has seldom been tested inside the cage, but found himself beaten in a pitched battle last time he tangled with Chandler. Given his incredible skill set, no one gets an easy win over Alvarez, and we can expect this to be another fight of the year contender.

The single weakness Alvarez has in a wobbly chin, having caused him to be dropped in nearly every fight he’s ever had. While it’s certainly not the end of the world for him given his tight boxing defense and resilience in the face of danger, it is a point that Chandler can take advantage of, given his emphasis of striking as of late. This could go many ways and is a close fight no matter how you slice it, but Chandler should repeat his previous feat midway through this title affair, plinking Alvarez and finishing with strikes on the ground.

145 lbs. Title Fight: Pat Curran vs. Daniel Straus: A fighter’s fighter, the technically precise Pat Curran will face his third title challenger, taking on Daniel Straus. Curran isn’t typically the most exciting guy, using a highly defensive, low-output style that lets him score while avoiding any major offense. It’s when his opponent makes an error that Curran shows he has a killer instinct though, lashing out with his flying knee and ripping power punches to dispatch his foe. With no real weaknesses other than that sometimes passive style, the man who takes Curran’s belt will have to have a solid game plan indeed.

The man stepping up to the plate this time is a surprise if you’ve followed the entirety of his career, but Daniel Straus is ready to show the world how far he’s come. A monstrous wrestler with a great deal of natural speed, Straus has really started to put the pieces together over the last few years, opting not to rely on physical gifts anymore and put the time in to learn the sport’s intricacies. Now armed with a fine knowledge of submission grappling and having a more scientific entry into the clinch and takedown phases, Straus has moved from predictable grinder to a true strategic nightmare.

Curran is a great fighter, but Straus may be the worst possible match-up for him in this division, as he lacks the wrestling finesse to halt the bigger man, and doesn’t have the reach to keep him at a comfortable distance. Curran’s inside striking is a great tool, but letting Straus that close means Curran is going to be hitting the mat within seconds. Curran has a deadly guillotine, and as stupid as this sounds, Straus hair will actually aid the champion in finding that choke here, making it his best weapon to retain the title. I feel this plays out similarly to Edgar vs. Henderson, with Straus taking the title based on a touch more output everywhere and a few takedowns that steal rounds for him.

205 lbs. Interim Title Fight: King Mo vs. Emanuel Newton: In a bit of sketchy business, Bellator will have the Interim Light Heavyweight title bout, despite the fact their actual champion is perfectly fine and ready to fight. That foolishness aside, King Mo comes into this rematch looking to avenge his KO of the Year loss to Newton in brutal fashion. King Mo started his MMA career back up a bit prematurely by my standards, having lost all mobility in his bad leg for his first several fights. This lack of movement ruined his chance at takedowns and turned him into a counter boxer, which worked well to an extent before Newton.

Newton has done well for himself in Bellator, with his only blemish coming via a bizarre decision loss to Attila Vegh, and will look to show his last win against King Mo was no fluke. Newton brings a high energy style which is rare for a Light Heavyweight, using looping strikes and a rapid clinch grappling style that grinds out larger opponents within minutes. While he’s not outstanding in any area, Newton is evenly skilled and his hard work in the gym shows through with his strong work across all rounds.

As solid as Newton is, if King Mo is at 100% for this fight, there’s essentially nothing Newton can do to stop his takedowns or avoid his superior striking game. It’s Mo’s ground and pound that defines him as a fighter, and while Newton is a scrambler on the mat, Mo can use the fence to trap Newton in half guard and destroy him from top position. Expect exactly that as King Mo puts Newton down time and again and batters the Hardcore Kid with short shots, forcing a ref stoppage in the second.

Mike Richman vs. Akop Stepanyan: A fight that will have any true fan drooling, dynamite striker Mike Richman takes on the karate stylist in Akop Stepanyan. Richman has been matched extraordinarily tough in his Bellator career, but his precision striking game makes him a lethal foe for anyone, Stepanyan included. Stepanyan isn’t the boxer that Richman is, but his razor-sharp kicking technique allows him to fire at safer distances and cut away Richman’s base. This is a game of range and I have to give a slight edge to Stepanyan to use his fleet footwork and multi-level attack to work Richman over for the decision win. 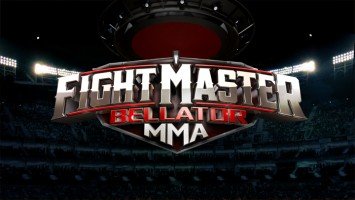 Fight Master Fianle – Joe Riggs vs. Mike Bronzoulis: The Fight Master Finale is upon us with two worthy competitors facing off for all the glory, albeit a bit after the show. These two guys are here due to the simple fact that they’re the two toughest guys out of the lot in Fight Master, and have some striking similarities despite being from two different eras. Both are powerful competitors that favor looping thunderous shots and extreme physicality, and both have extraordinary mileage in their careers, whether in terms or real years or long rounds. The difference is that while Riggs is a clunky fighter because he’s been through the wringer, Bronzoulis is clunky because he never learned the right way to do it. It’s this chasm of technical knowledge between the two that makes all the difference, as Bronzoulis brings nothing Riggs hasn’t learned, seen and dealt with in the gym or cage. With no surprises, Bronzoulis is matching power to a man built for the same, and has few outs to win this one, losing a spirited decision to Riggs.

Jesse Juarez vs. Joe Williams: A battle of two wrestlers, Bodyshop’s Jesse Juarez will take on Fightmaster contestant Joe Williams. Juarez has done well for himself in his career, using the same one-shot striking style and top-heavy grappling game of instructor Antonio McKee, yet the fight world is beginning to pass him by in terms of versatility. His opponent is similar in terms of game plan, but Williams has a bit more of an upside in his ability to scramble and work his wrestling skills into the MMA world. It’s nearly a coin flip, but I lean Williams to be a little more active and avoid getting stuck under Juarez, taking a split decision win.