June, August and in a couple of months we have October. Every other month the UFC is on track to take over the world of Mixed Martial Arts.  An alarming 9 of the Top 10 fights to watch this month take place inside of the world-famous Octagon. Three of them take place tomorrow night in Philadelphia. Lets take a gander, shall we.

For Dan Hardy this one is the classic definition of an up against the wall fight. It seems that Zuffa fighters are getting cut after three losses these days unless they do one of two things. Change weight classes or bring new fans to the sport. Dan Hardy is responsible for doing the latter. How many fighters can actually name their own opponent coming off three losses? Hardy is desperate for a stand up war after dropping two of his last three via his achilles heel. Good old-fashioned wrastlin’.

Chris Lytle’s ground game isn’t anything to scoff. This is a guy who has finished 21 fights via submission. Now I know we all want to call Hardy gumby after his out with GSP but the only thing that may be missing from the reigning Welterweight Champion’s game is his submissions. Sure Lytle loves to stand and bang but when it comes to fight night why not take down Hardy and finish off his UFC career?

This one could be curtains for Hardy on the main stage or it very well could be the re-birth of Nottingham’s Outlaw. Whatever the outcome may be for Lytle he will always be remembered as one of the most game fighters in UFC history.

Ebersole increased his fan base ten fold this past February much to the chagrin of Chris Lytle. After dropping four in a row in the UFC, a win over Ebersole could extend Hallman’s current win streak to three. This Saturday night in Realadelphia numbers don’t mean a whole lot. The fact that these two have upwards of 120 professional Mixed Martial Arts fights between them doesn’t concern me. What does interest me is the possibility of cartwheel kicks, crazy chest hair designs, and insane “Superman” Hallman submissions.

Belfort looks for his first win in the UFC at 185 this Saturday Night coming off a devastating loss to Anderson Silva for the Middleweight Championship. Three for three Fight of the Night winner Yoshihiro Akiyama is fighting for his job coming of his 2nd straight loss to a Top 10 Middleweight. When you factor in the power of Vitor’s hands with Akiyama’s granite chin and judo throws you have a recipe for a beautiful disaster.

An unexpected rematch between two Light Heavies who fought to a draw back in the Summer of ’07 has a lot of fans changing their Saturday Night plans. Tito Ortiz being back may be the focal point of the advertising campaign for UFC 133. But what about Rashad? Evans hasn’t fought since UFC 114 way back in May of last year where he decisioned Quinton Jackson. The winner of this fight could very well be the next in line for the Light Heavyweight Strap which is on the line next month in Colorado. Everyone (including myself) talking about Tito being in the mix feels like we just hopped in an MMA time machine doesn’t it? Not that there’s anything wrong with that! 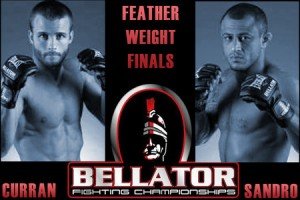 The only non Zuffa fight on this list has major Worldwide Featherweight Ranking Implications. Both fighters have won 2 in a row to earn their place in the Bellator Inaugural Summer Series Featherweight Tournament Finals. I’ve been wrong before but I see Sandro defeating Curran to cap off another very exciting Bellator Summer Series Event.

Two of the most exciting Lightweights this sport has to offer both have something to prove in the world of “what have you done for me lately”.

“Cowboy” Cerrone is no stranger to putting on exciting shows for his fans but he finds himself coming off a snoozefest victory over Vagner Rocha just two months ago. A 14-0 start seemed to have Charles “do Bronx” Oliveira on the fast track to UFC glory. After a loss to Jim Miller and a FOTN performance that ended in a NC against Nik Lentz, a win over Cerrone would put Oliveira right back in the mix.

When Joseph Benavidez and Eddie Wineland collide this August it won’t be on the televised Main Card portion of UFC on Versus 5. Unless we’re talking about Title fights these UFC Bantamweights just can’t get no respect.

If you tuned into “Countdown to UFC 132″ and fell in love with the story of Eddie Wineland or if you recognize Joe B-Wan Kenobi from his WEC on Versus days it doesn’t really mean a whole lot unless you a UFC Die Hard. Two very marketable fighters in a division that needs all the promotion it can get will clash in a very important Bantamweight fight that will hopefully be available on the Live Facebook stream. Dollaway vs. Hamman is a very solid Middleweight contest but there is absolutely no reason why this one doesn’t deserve to be broadcast on Versus. None.

In what should be the Main Event of UFC on Versus 5 we have a possible Lightweight Title Eliminator.

Miller brings a seven fight win streak into this one while “Bendo” is coming off a unanimous decision win over Mark Bocek at UFC 129. Miller and Henderson both bring very well-rounded games to the table. I’ll be very surprised if this one doesn’t go the full three rounds.

Forrest shocked the world when he submitted Shogun back in 2007. He has the chance to become the first man to defeat Shogun twice which should cement him as one of the greatest UFC Light Heavyweights of all time.

While Shogun has revenge as motivation, Forrest has the invisible ” Oh you beat Shogun when he was injured” asterisk next to him which he’d love to remove. A monster match up that would be worthy of headlining any event.

Anytime Anderson Silva fights it’s the biggest fight of the month in my world. Okami is the last name to defeat Silva and even though it was via a first round DQ, Silva wants to show the world that L on his record was bogus. Okami will be looking to do something no one else in the UFC has been able to do, defeat the spider!