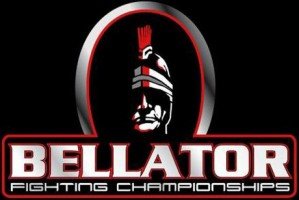 Just when you think you’ve seen it all in MMA tonight’s Bellator 83 reminds you that there is always something strange an odd around the corner in our sport of mixed martial arts. Minutes before the featherweight tournament final between Rad Martinez and Shahbulat Shamhalaev took place it was announced the bout would be postponed.

But let’s back it up a little bit and get to the night’s action prior to the Bellator 83 main event.

Jessica Eye vs. Zoila Gurgel: A clash of ladies went down at a fast and furious pace, as Jessica Eye took on Former Bellator Women’s 115lb champion Zoila Gurgel. Both girls immediately began trading, but a straight from Eye put Gurgel on her backside within moments. As the dazed Gurgel tried to regain her feet, Eye gave her no space, slipping to her back standing and throwing an arm-triangle on her opponent. Try as she might, Gurgel couldn’t escape and eventually went out on her feet.

Anthony Leone vs. Zach Makovsky: A feeling out process kicked off this fight, with Leone pawing with punches while Makovsky moved around coiled and ready to launch into the offensive. A minute and a half in, Makovsky hit a single leg that put the larger man on the mat, but a scramble by Leone saw the action return to the feet. It became obvious that Leone was hunting for a counter and found it several times, but Makovsky got his shots in on the way in as well. A shot by Leone turned into a standing guillotine by Makovsky, but he can’t find the hand position to fully engage the choke and bailed as the round devolved to clinch wrestling. Leone 10-9

Lunging attacks from Makovsky and another single leg failed to function for the former champion as a guillotine by Leone stalled his opponent out. Using his size, Leone tried to hustle Makovsky on the cage, but the wrestling skills of Makovsky proved to be a cut above his opponents as he hit a quick takedown.  Pushing for the fence again, Leone continued to control his opponent before Makovsky got on his bicycle and started putting punches together. A single leg by Leone found him in Makovsky’s wheelhouse; Transitioning from guillotine and quarter position on his opponent. Leone stayed patient and found his way to Makovsky’s guard, but a triangle started a scramble that saw Makovsky hit a takedown before losing position to defend a leglock. Back on the feet and a head kick from Makovsky closes out a close round. 10-9 Makovsky

With the fight close, Leone comes out hard with punches that back Makovsky up and force a shot.  Leone used the movement to set up a guillotine and put his all into it, but couldn’t find it on his scrappy foe. Playing it safe, Leone hit a takedown and looked to stall the fight from top as Makovsky looked for submissions and sweeps from bottom, but eventually lost the positioning battle. Leone achieved North-South, but Makvosky leapt up and locked in a guillotine of his own, but Leone survived to take top position again. Holding dominant position at all cost, Leone held Makovsky to the ground with all his might and took a clear third round 10-9.

After the fight a quick look backstage in preparation for the main event saw Shamhalaev upset and in another room, Bjorn Rebney talking with Martinez, who also looked upset. Rebney, Bellator’s CEO would inform everyone the Shamhalaev had food poisoning and the NJSAC would not let him fight, so their tournament final would now take place next week at Bellator 84.

Fast footwork and hard and accurate punches kicked off this fight, with Liguori using beautiful straight shots against Horcher’s hooking shots. Both fighters landed several blows, but Horcher found Liguori’s chin and sent him to the canvas a minute and half in. Horcher locked on a nasty guillotine that saw him pulling his opponent off the ground entirely, but the veteran fighter popped his head out at the last second. HIs respite was short indeed though, as a straight left hand blasted Liguori clean off his feet badly hurt with Horcher following with ground and pound. Horcher allowed his opponent to stand rather than play with the BJJ fighter on the mat, but found himself there anyways as Liguori shot weak takedowns as he tried to clear his head. Horcher turned on the offense and battered Liguori all over the cage, as he looked to get his bearings, but Horcher gave him no space to clear the cobwebs. Hitting a solid takedown, Liguori turned the tide for a moment but Horcher took the round easily, 10-9.

With his wits back about him, Liguori came out working from the outside, but was soon eating power shots from Horcher again as they traded and danced around the cage. A crushing left hook counter from Horcher put Liguori on rubber legs and the follow-up sent him to the canvas, but Liguori once again saved himself with his BJJ, forcing the fight back to standing. Horcher, firmly in control of this fight, went for a legit pro-wrestling body slam and nailed it, but soon gave up side control to hunt for the KO again.  Liguori attempted to play on the feet, but had little choice as his takedowns proved to be ineffective at putting Horcher down. Liguori finally hit a takedown in the last moments of the round, but too little too late. Horcher 10-9.

Liguori came out hard in the third, still confident in his hands as he landed on Horcher and seemed to get the better of the match in the early going. Stiff return shots from Horcher found the mark though and put Liguori in trouble, but a fast single leg put Horcher down in the middle of the cage and gave Liguori a glimmer of hope in winning this fight. Working from side control, Liguori stayed busy, but couldn’t get anything going to definitively end the fight. Even an illegal “chin-to-eye” technique couldn’t get a win for Liguori, although he did take the round 10-9.

With the postponement of the Bellator 83 main event next week’s last card of the season get another tournament final to go along with the other two already scheduled.