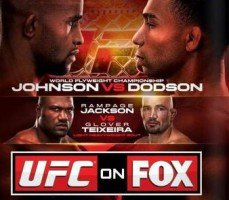 If the FOX executives had a thing against blood then they really didn’t like tonight’s UFC on FOX 6. Nasty Elbows turned unlucky fighters into a bloody mess that would have made any horror movie director proud. It was the flyweights that headlined UFC on FOX 6 but the featherweights and lightweights stole the show.

TJ Grant continued his winning ways at lightweight with a first round knockout of Matt Wiman. Grant landed multiple brutal elbows to help him win his fourth consecutive bout since his move down to the 155 lbs. division. Also in the lightweight division was the former WEC champion Anthony Pettis using a liver kick to crumple Donald Cerrone halfway through the opening round. After the fight Pettis asked Dana White what he’s got to do for a title shot, the impressive win might be just what he needed.

In the flyweight division, Ricardo Lamas defeated Erik Koch with nasty elbows that cut him and sent him to the hospital. With the featherweight champion Jose Aldo defending his belt next week, depending on how the chip fall Lamas might have earned himself a title shot.

The UFC on FOX 6 produced some good fights and several fighters greatly improved their status within their respective divisions.

Fight of the Night: Demetrious Johnson vs. John Dodson

Submission of the Night: Ryan Bader

Knockout of the Night: Anthony Pettis

The UFC on FOX 6 took place from the United Center in Chicago, Illinois.