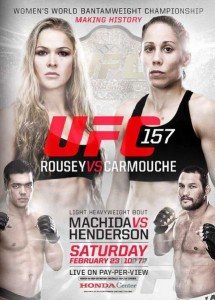 The majority of the talk surrounding this Saturday’s UFC 157 has been about the first ever women’s MMA about and Ronda Rousey. This is not a bad thing at all as it brings some much-needed attention to women who compete in the sport. There is however more fights than just the UFC 157 main event and some of them are pretty good too.

Headlining the card as you probably know is the former Strikeforce women’s bantamweight champion Ronda Rousey making her UFC debut and defending her title against Liz Carmouche. Rousey has submitted all of her opponents in the first round via armbar and it’s hard to think Saturday will not be that same.

In the night’s co-main event, light heavyweights Dan Henderson and Lyoto Machida face off for what they hope will be a shot at the title. Henderson had his title shot against Jon Jones all schedule for UFC 151 until he got hurt and the event went down the drain. Machida wants another shot at the champion but must get past Henderson to even have a shot at that. Their contrasting styles make for an intriguing fight that could end in some many different ways.

Also on the UFC 157 main card is a bantamweight bout between Urijah Faber and Ivan Menjivar along with Josh Koscheck vs. Robbie Lawler and Court McGee vs. Josh Neer in welterweight action.

Last weekend at UFC on FUEL TV 7 I sort of rebounded by going 7-5 with my predictions but it wasn’t pretty. With two events in a row that were less than spectacular the overall record currently sits at 34-22 (60%) heading into the 12 fights at UFC 157.

UFC 157 takes places at the Honda Center in Anaheim, California.