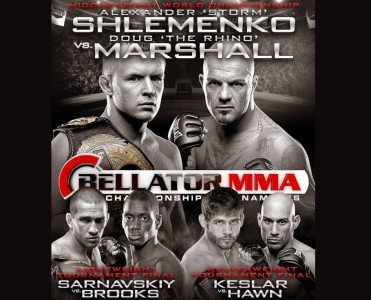 Friday’s Bellator 109 will be the last event of the season for the promotion and will feature a surprisingly impressive title fight. But that’s not all though as the Bellator 109 main card will also see the closure of the Lightweight and Welterweight tournaments.

We’ve got some contentious bouts to cover, so let’s check out how these play out.

Alexander Shlemenko vs. Doug Marshall: If you told me five years ago that Doug Marshall would be competing for a world title again, I’d have thought you were insane, yet here we are.  Having completed a Middleweight title run with two brutal KOs and a disputable decision win, Marshall finds himself set for championship gold again, taking on long-time Bellator ace Alexander Shlemenko.

Shlemenko has gained and held onto his title through his gutsy performances of late, having an eleven fight win streak against some of the best Middleweights outside the UFC. Using his low output but high intensity karate style, Shlemenko’s spinning backfists, crushing knees and punches have put several foes on ice, and he’ll look to make Marshall his latest trophy.

On paper, there is no way Marshall can win this fight, yet you could make that argument of his last four bouts as well. The fact of the matter is, Marshall’s old man strength has clearly translated into his simple, yet effective, muay thai, and you’re not going to find too many fighters that can take one of his punches and stay on their feet.  Guys like Kala Hose and Brett Cooper are made of granite and Marshall poleaxed them with his left hand, making this a dangerous fight for Shlemenko regardless of records.  While I have to give Shlemenko a slight edge due to his range control and championship experience, don’t be surprised if Marshall catches the Russian and rips the title from his hands.

Alexander Sarnavskiy vs. Will Brooks: A make or break fight in the Lightweight tournament finals, Alexander “Tiger” Sarnavskiy will face hot prospect Will Brooks. Sarnavskiy has pasted his two opponents in this tournament with his aggressive and precise offense, showcasing his wrestling game that he’s worked since his loss to Rich Clementi. Brooks hasn’t been idle either, having taken John Alessio and Saad Awad to a decision on virtue of his dynamic wrestling and inventive striking style.

Despite Brooks natural talent for grappling and supreme athletic potential, he has a major flaw in his utter lack of defense, even looking legitimately surprised when someone manages to land a strike on him. Being this unconscious of your own mortality in the cage could prove to be disastrous against a lethal fighter like Sarnavskiy, as it only takes one misstep for the Russian to pounce. The deciding factor here is Brooks use of range control and his effortless wrestling, fighting from a defensible karate stance and having a lightning shot for anyone looking to close that considerable gap. This could be a nail-biter, but I think Brooks point fighting style of outside strikes and takedowns will shut Sarnavskiy down in a three round fight, giving Brooks the decision and setting up a title shot in the future.

Rick Hawn vs. Ron Keslar: A somewhat lackluster tournament final, Rick Hawn will look to capture the ticket to the vacant 170lb title fight, taking on replacement fighter Ron Keslar. The fact this is a tournament final speaks to how weak of a tournament this was, with Hawn having hustled his way into the final and Keslar winning on the easier side of the bracket with decent, yet uninspiring performances.  If Keslar thinks he’s going to pull a Brennan Ward and win the entire tournament, he’s sadly mistaken here, as he simply doesn’t bring anything to threaten Hawn, and should see himself soundly beaten with Hawn walking with the decision win.