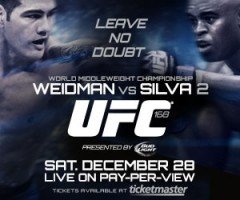 A night of short fights and utter brutality made this year-end UFC 168 fight card one of the most violent in history. A lot of fighters put on career-defining performances and some were ushered out of their careers in horrid fashion.

Check out how it went down below.

Uriah Hall: Trying to prove he isn’t just a gym fighter, Hall came out against Leben and pulled off the win, though showing he’s still a loose cannon.  The game plan was simple; shifting around the cage and not being there for Leben to hit, and he pulled this off with grace and an economy of motion of a pure martial artist.  However, Hall showed he’s still clearly a head case with his utter distain for his own performance and clear lack of comfort when Leben made it past his wall of strikes.

Hall is a person you meet everyday in life.  A man who thinks “If its not perfect, it’s garbage.” and applies that to themselves as well.  No one fights perfect, and how easily he’s unnerved makes him ripe for a loss every time he steps into the cage.  A true martial artists, but simply not a fighter.

Jim Miller: An outstanding performance from an elite-level fighter, Miller locked up a technically perfect armbar against a legit terror in Fabricio Camoes.  Miller doesn’t get his due as a submission wrestler, due to losing the wrestling portion of many fights against top-tier opponents.  It’s his wrestling knowledge combined with BJJ that makes him such a threat, knowing what an opponent is setting up and having half a dozen appropriate counters at his fingertips.  He’ll never be title worthy at his age, but no one outside the true elite is going to get past him.

Travis Browne: A fighter I can admit to selling short sometimes, Browne came out with a perfect game plan of sticking, moving and settling into strikes when it suited him, blowing Barnett out of the water immediately.  Something that we tend to forget when dealing with heavyweights is the incredible range of athleticism involved.  There are no soft, slow, sloppy Featherweights fighting speed demons within the same weight class, but this can come up with a sixty pound weight division.  Despite being huge, Browne moves as well, and is as athletic, as the best guys in his division.

The other interesting aspect were the elbows and how he manages to generate so much power with a move that rarely leads to anything other than wasting time that could have been spent looking for underhooks.  By shifting his stance subtly into his opponent, Browne brings the elbow down into the front of his own hip, using all the power in that side of his body, rather than the lackluster arm strike of most fighters.  Cool technique that you can bet will be working its way into a few guys arsenals.

Ronda Rousey vs Miesha Tate: A fight that showed more out of Rousey than we’ve ever seen, we’ve finally got something tangible to work on in the fight lab aside from armbar highlights.  Rousey’s main strengths here are her core strength and relentless offense, both of which put Tate on the defensive, the former by deflecting and redirecting takedowns and the latter by giving Tate no space to work.  Rousey’s hands are coming along, but other than putting something on an opponent’s mind, she really doesn’t need striking offense.  Simply put, short of someone much stronger, much more wily on the mat, or with a very particular wrestling game, Rousey takes every fight at 135lbs.

For Tate, she did a great job in there, but her game plan was a failure before the fight even started.  Theres a big difference between working well under pressure and surviving under pressure, and while Tate can take a massive beating, she tends to shut down mentally in a pitched fight.  Her striking combinations resulted in her legs going everywhere, and her takedowns, once stalled, put her in the worst positions possible.  Takedowns against a judoka of that level need to either be complete successes, or immediately aborted, as hanging around on a judoka’s hips never ends well.  A solid showing, but a fight beyond her skill set. 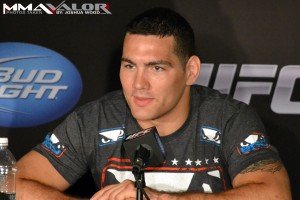 Chris Weidman vs Anderson Silva: A tough fight to watch at the end, this one was meant to definitely answer questions left after their first match, and it ended up concluding in similarly unsatisfying fashion. Weidman showed us more of what he has at the elite level in this two rounder, though the ending was not what either fighter would want.  Weidman’s greatest attribute as a fighter is an utter fearlessness, having no hesitation in his actions, even if facing a living legend in Silva.  He fought entirely on his terms, dictating the pacing by engaging and disengaging rapidly and staying safe in the process.  His takedown looked sharp, though there are a few guys at Middleweight whom have his beat in that area, and he worked will in clinch against a lethal clinch fighter.  Working from top against someone with a guard built to end fights, he was patient and used smart ground and pound doing damage with short elbows; clearing hands and restricting shoulder movement at the same time.  The check of the hard leg kick was what ended the fight, and was timed well, again using that lack of intimidation to his advantage.

For Silva, we saw a sad end to a career, as I can’t imagine he’ll return to the sport considering the lay off needed to rehab the injury.  His movement was sharp and he was smart not to over-extend against the wrestler, though Weidman’s movement gave him little to work with.  The most concerning moment was the short right hook that dropped him in the first round.  Looking at the strike, it was well outside of its power band, being thrown above the shoulders and squared to the target, yet it sent Silva to the canvas in a heap.  That’s not good considering he’s taken some hellacious beatings and come away perfectly fine, and Weidman isn’t a crushing puncher by any stretch.  If the leg hadn’t broken, I’d say Silva wouldn’t be around much longer either way, as his chin is clearly compromised from the KO in the first fight with Weidman, if not his confidence.  A stretcher isn’t any way for a former champ to leave the arena.