This past year has been extraordinary for Mixed Martial Arts, the UFC and fans that follow the fastest growing sport. To relive this year the Ultimate Fighting Championship and Anchor Bay Entertainment are bringing fans the biggest DVD box set of the year, UFC: Ultimate Fight Collection 2011 Edition.

UFC: Ultimate Fight Collection 2011 Edition is a look back at one of the most exciting 12-month periods in MMA (July 2010 and June 2011). Included are bouts from UFC 116 – UFC 131, UFC Fight Night 22-24 and UFC Live 2-4. These are the fights that gave us four new champions, stirred-up old rivalries and had unforgettable outcomes.

The collection includes 170 fights including champion bouts like Lesnar vs. Velasquez, Silva vs. Belfort, “Shogun” vs. Jones and St-Pierre vs. Shields. A total of 20 DVD’s capture every important moment of that last year, with over 40 hours of footage – including 10 hours of content never before available on DVD. Featurettes include Best of Unguarded, Best of Rogan 1-On-1 and Best of Fight School.

The UFC: Ultimate Fight Collection 2011 Edition will by exclusive released on November 8th at Best Buy and then everywhere else on December 6th. 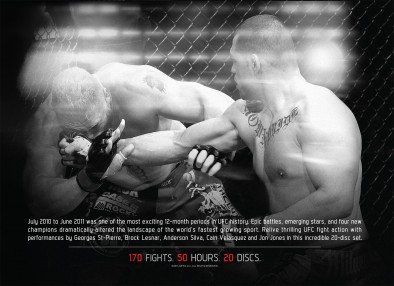