Joe Schilling has been in the fight game since he was 17 years old.  His devastating knockout of highly touted Muay Thai fighter Kaoklai Kaennorsing catapulted him into stardom in the Muay Thai scene.  Schilling is hoping his rise to fame can help thrust the sport into the American spotlight, with the help of Lion Fight Promotions.  Looking to avenge a highly controversial loss to Simon Marcus which you can see here, Schilling hopes to settle the score with Simon, once and for all.

Gerry Rodriguez: You’re fighting May 12th in a rematch against Simon Marcus at The Joint At the Hard Rock in Vegas.  The outcome of the first bout was a bit controversial; can you tell us what happened?

Joe Schilling: There was a lot of build up and hype for the first fight.  He said some things about me and I said some things about him.  Somehow the idea to bet our fight pursues came up and there was a lot of hype for that.  There was a sweep that was controversial that may or not be legal.  Upon tripping me he landed on top of me.  My head hit the canvas and his elbow landed on my head.  I was knocked out and I got up and was obviously not coherent and he took advantage of the situation and knocked me out.

Gerry Rodriguez: You mentioned that it may or may not have been legal.  In your opinion was it legal or not?

Joe Schilling: A lot of times in fighting we do things that are questionable.  In Muay Thai you are not allowed to trip with the back of your leg, you can only trip with the side of your leg.  At the moment when it happened I wasn’t really aware what happed.  In watching the tape it looked illegal to me.  The trip wouldn’t have mattered if it didn’t directly change the outcome of the fight.  The trip wouldn’t have been a big deal if I hadn’t been knocked out.  It directly affected the outcome of the fight.  We appealed the decision just to get the rematch.  The trip was questionable, he landing on my head was questionable, and the referee didn’t even look in my direction.  It is what it is and we got the immediate rematch and look forward to finishing the fight.  The fans of the sport…it’s really important that the sport grows.  There were a lot of disappointed people that night.  They got cheated out of a good fight.

Gerry Rodriguez: Is there genuine bad blood between you guys?

Joe Schilling: I think it started out as bad blood.  The more you talk about it and the more interviews you do, it turns into just selling the fight.

Gerry Rodriguez: Lion Fight Promotions is making an aggressive push to really give more exposure to the sport.  What do you think it will take for Muay Thai to catch on in the states?

Joe Schilling: We’ve been having this conversation for years now.  The sport is catching on and we’ve seen a lot of growth in the last two years.  There’s a lot of momentum and Lions Fight is doing a lot of promoting to make it grow and they’ve done a great job. 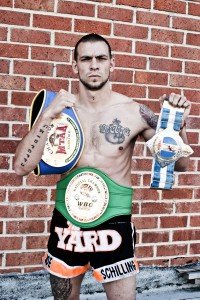 Gerry Rodriguez: What about fighting inside a cage? Do you think that could make it more appealing to people? How would that affect the fighters?

Joe Schilling: I don’t think it really works.  I don’t think crossing MMA and Muay Thai works.  I think it’s a bad idea.  Honestly I think the cage doesn’t even work in MMA.  If you go to a UFC fight most people are looking up on the big screen.  I don’t think it would it make such a big impact.  You would only get the fans that don’t understand the sport anyways.

Gerry Rodriguez: I read when you were 17yrs old; you started competing in Tough Man competitions.  Can you tell me what that was like?

Gerry Rodriguez: Is there a fight from that time in your life that you feel really accomplished about?

Joe Schilling: My first fight.  I’m a pretty lean guy now.  But I was really skin kid.  In the Tough Man they don’t really have weight classes.  I fought a guy called “The Bad Rooper”.  He was a redneck from Ohio.  I was pretty nervous about that one.  I went out there swinging and hit him with a right hand to the body and he quit right away.

Gerry Rodriguez: Getting back to your upcoming fight with Simon Marcus.  How does a training camp for Muay Thai differ?  Is there any weight cutting involved

Joe Schilling: Weight cutting is a big factor.  Fight camps are pretty consisted pretty much every time.  I have a fight and then have a month break in between.  The first few weeks are all about strength training and as the fight gets closer you work on cardio and conditioning.  My camps typically last 8 to 9 weeks.

Gerry Rodriguez: You showed up on UFC’s Primetime and you trained with Nick Diaz for his fight with Condit.  How did that come about?

Joe Schilling: Well there’s a gym up there (Dublin, CA) called CSA with coach Kirian (Fitzgibbons).  Kirian and I have known each other for a while and he called me up saying Nick Diaz had a fight and if I wanted to come in and train.  Actually it was with Nate first, he was getting ready for his fight with Cerrone.  I really like Nick and are pretty good friends now.

Gerry Rodriguez: How would rate the Diaz brothers stand up skills?  Everyone always raves about them, especially Nick’s.

Joe Schilling: I think they’re both really underrated.  I’d say either one of them could jump into a Muay Thai fight anytime soon.  I’ve never met anybody that’s more of a complete athlete than those guys.  I’ve sparred with a lot of MMA guys and Nick is probably the toughest guy I’ve sparred with.

Gerry Rodriguez: Did you pick up any Jiu Jitsu from them?

Joe Schilling: With Nick I did.  He was showing me some stuff.  Shit if you can learn jiu jitsu from Nick Diaz, you do it. (laughs) Cesar Gracie has a phenomenal team and look forward training with them again.

Gerry Rodriguez: You’ve mentioned in the past that you’re looking at possibly of transitioning into MMA.  Is that still something you plan on?

Joe Schilling: Absolutely.  Especially recently.  I was up in Vegas last week and training with Dan Hardy a little bit and being around Frank Mir.  I used to go to Team Quest and spar with them a little big.  Right now I’m focusing on Muay Thai, but in the future there’s a possibility you’ll be seeing my in a cage.

Gerry Rodriguez: Last question, you recently launched canstopcrazy.com.  What can of content can people expect to see on there?

Joe Schilling: Basically I got together with my friends.  The community is pretty small here in Muay Thai.  We had the idea to show a more personal side to us.  The idea is to show how we train and how we act.  Us cutting weight, silly eating contest, and more of an insight on what we go through.