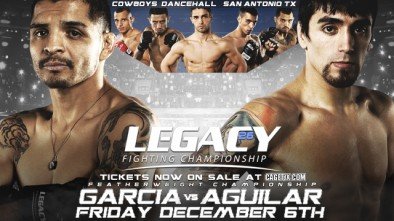 A card for hardcore LFC fans as some of the best the promotion has to offer will be in display during Friday night’s LFC 26. It’s a fight card that’s set to go fast, with murderous finishers across the board headlined by the former WEC and UFC fighter Leonard Garcia fighting for the featherweight title.

Legacy FC will have to complete with the UFC Fight Night 33 main card, which begins one hour prior LFC 26 so make sure to set your DVR’s accordingly. Now let’s check out how the night plays out at LFC 26.

145 lbs. Title Fight: Leonard Garcia vs. Kevin Aguilar: Our main event of the night for LFC 26 is a career-defining bout for both men, as former UFC competitor Leonard Garcia will look to snatch his first title and a trip back to the Octagon, as he takes on undefeated talent Kevin Aguilar. Garcia has looked somewhat sluggish, yet still dangerous in his time in LFC, taking on some reasonable opposition and coming out with wins. While he’s never fixed the myriad of holes in his game, Garcia has been able to show some of his lost talents at this level, such as a solid grasp of BJJ and has regained the timing on his thunderous punches against this caliber of opponent.

Aguilar has been quietly tearing apart the LFC featherweight division, using his athletic striking style and smooth BJJ to snatch wins however he can get them. Aguilar’s best attributes are his reflexive speed, the use of a sharp inside leg kick, and his submission skills off of his back, where his fast hips are often too much for opponents. Having no one left to punish at 145lbs, Garcia is the only thing standing between him and a larger promotion.

This one is a tough call, as Garcia hasn’t looked amazing here, but does still present a problem to Aguilar, being the best opponent he’s ever faced. Garcia isn’t going to go down easily, he’s been in long and brutal fights more than a few times, and his strength and striking power can turn the tides fast. Aguilar is clearly the more polished fighter however, with a style meant to chip away at opponents before sending them packing for good. While I like that Garcia has Donald Cerrone to train with for this one; a fighter that can perfectly emulate Aguilar, I don’t like that Garcia doesn’t appear to be spending much time in the gym at all to gain that edge. A close couple rounds turn into Aguilar taking this one over midway through the fight and taking Garcia to decision loss as the former UFC fighter’s gas tank betrays him once again.

George Pacurariu vs. Thomas De Almeida: Two underrated strikers lurking in Texas, Romanian karateka George Pacurariu will look to break the impressive undefeated streak of Chute Boxe fighter Thomas De Almeida. Pacurariu came off a tough loss last time out to Aaron Cerda when his head was laid wide open in a tight match-up. I fear he’ll have more of the same here though, as Almeida is one of the sharpest muay thai fighters I’ve seen in some time, and has the inside game down to a science. Pacurariu has some massive power, but he’ll have a tough time landing it on Almeida considering he’s from a camp known for the same looping power shots. Look for Almeida to play it safe in the first round as he gets Pacurariu’s timing down, and then start to bust his foe up on his way to a late first or early second round TKO.

Johnny Ray Rodriguez vs. Patrick Ybarra: A fight that should be over fast, Johnny Ray Rodriguez will attempt to stand in the path of Patrick Ybarra and walk away with both his arms intact. Ybarra ran into a brick wall in the form of Damacio Page last time out, but the fight showed the young fighter exactly what he needs to work on to continue as a force in his career. Rodriguez simply doesn’t have the tools to deal with Ybarra’s rapid fire offense, and the flying armbar will be there for the taking as Ybarra gets a tap a minute in.

Chris Pecero vs. James King: A featherweight looking to work his way to the top of LFC, Chris Pecero will take on journeyman fighter James King in a test of his mettle. King isn’t the most skillful fighter, but he brings the pressure and punching power needed to test young fighters like Pecero who will need to chew up such can crushers to move forward in his career. Pecero needs a bit of urgency in his overall game, and I hope he finds it here against a game opponent, hitting a takedown and submission late in the first round.