Last month saw little change to the MMA Fighter Rankings, while this month balanced things out with plenty of changes. The month on July saw most of the top middleweights in the world in action and the results have re-worked the division rankings

With his 2nd round win over Chael Sonnen and UFC 148, Anderson Silva obviously stayed as the #1 middleweight in the world. Surprisingly Sonnen remains in the #2 spot for now as the rest of the division didn’t take advantage of the opportunity. Hector Lombard (#3) and Mark Munoz (#4) both lost in July and now find themselves on the outside looking in at the top five. Michael Bisping made the biggest move this month, going from the #5 spot up to #3 and he didn’t even fight this month. With two fighters out of the ranks the Strikeforce middleweight champion Luke Rockhold (#4) makes his first appearance in the top five as does Chris Weidman (#5) who brutally knocked out Munoz at UFC on FUEL TV 4.

The UFC interim bantamweight title was on the line at UFC 149 and Renan Barao defeated Urijah Faber by unanimous decision. The win by Barao moved him ahead of Faber into the #2 spot behind the injured UFC bantamweight champion Dominick Cruz.

A look ahead at August has light heavyweight Mauricio Rua (#4) and Lyoto Machida (#5) in action at Saturday’s UFC on FOX 4 event. Lightweight champion Ben Henderson (#1) will make his first title defense against the man he beat to win the title, Frankie Edgar (#3). The #2 featherweight Pat Curran will also be in action as he’ll defend his Bellator title against Patricio Freire (#5) at Bellator 73. 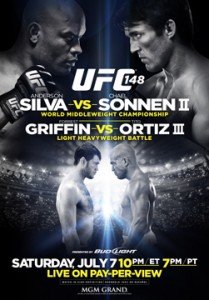